The week of Nov. 10-16, looking back in five-year intervals

1893: Nebraska falls to Missouri, 30-18, in Kansas City. After a 12-12 first half, Mizzou gained the upper hand, in part by keying on the Cornhuskers' George Flippin.

1898: Drake answers a Nebraska field goal with a first-half touchdown, and that holds up for a 6-5 victory for the Iowans in Lincoln.

«1903: John Bender comes through with huge plays on offense and defense to lift Nebraska to a 6-0 win at Kansas.

1908: With the Missouri Valley championship at stake, Nebraska is upset by Kansas, 20-5, in Lincoln.

1913: The Cornhuskers improve to 7-0 as Dick Rutherford and Vic Halligan pace Nebraska to a 9-0 win over Kansas on a muddy field in Lawrence.

1918: Nebraska dominates the second half, turning a 2-0 game into a 20-0 Homecoming win over Kansas on a field of "slimy, black ooze." End Clarence Swanson scored two of Nebraska's three TDs. 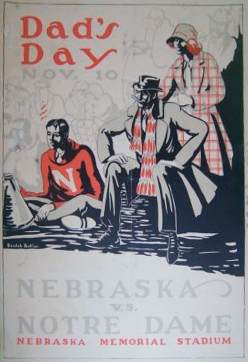 «1923: Halfback Dave Noble scores both Nebraska touchdowns in a 14-7 upset of Notre Dame. It was the second year in a row that the Cornhuskers handed the Irish their only defeat.

1928: The Huskers ruin Oklahoma's Homecoming with a 44-6 thrashing of the Sooners.

1933: Nebraska clinches its third consecutive Big Six title with a 12-0 win over Kansas in Lincoln. The Huskers outyarded KU by 276-93, and both TDs came on passing plays: a 72-yarder from George Sauer to Bruce Kilbourne, and another Sauer-to Kilborne strike followed by a lateral to Bernie Master­son, who completed the 26-yard scoring play. | Pregame photo collage

1943: Nebraska's game with Pittsburgh was canceled because of wartime travel restrictions.

1948: Shut out for the first 25 minutes, Oklahoma rolls to a 41-14 rout of Nebraska in Norman. Nebraska gained just four first downs, two of them by penalty.

1953: The Huskers can't cash in after gaining first-and-goal at the Colorado 5-yard line with three minutes left in the game, and Colorado upsets Nebraska on Homecoming in Lincoln, 14-10. Ray Novak's plunge on fourth down came up one foot short. NU had a 20-10 advantage in first downs, and the Huskers' Bob Smith rushed for 122 yards. Ten members of NU's undefeated 1913 team were honored at the game.

1958: The Huskers upset heavily favord Pitt, 14-6, to complete a two-game sweep of Pennsylvania teams in an otherwise dreary season.

1963: After building a 17-point lead, the Huskers' fend off a late Oklahoma State charge to win in Stillwater, 20-16, setting the stage for a showdown with Oklahoma in Lincoln.

1973: The Huskers appear Cotton Bowl-bound after a coasting to a 31-7 win over Iowa State.

1978: In a game voted the most memorable of the Huskers' sellout streak, Nebraska upsets Oklahoma 17-14, giving Tom Osborne his first win in six tries against the Sooners. Among those cheering the victory was injured Husker Budge Porter.

1983: On a record-shattering day for Mike Rozier, the Huskers run over Kansas, 67-13. The Jayhawks suffer further by being placed on NCAA probation, partly as a result of allegations by Nebraska I-back Jeff Smith.

1993: The Huskers climb to No. 3 in the AP poll and No. 2 in the coaches' poll after clinching an Orange Bowl berth with a 49-17 win over Iowa State, but Nebraska's big-stage worthiness is questioned in the media.

2003: Kansas State hands Nebraska its worst home loss in 45 years, 38-9. (It was the game that reportedly convinced Steve Pederson he should fire Frank Solich.)

2013: Nebraska commits five turnovers, all in its own territory, in a 41-28 loss to No. 14 Michigan State. Earlier in the week, it became evident that quarterback Taylor Martinez's Husker career was over because of a foot injury.