The week of Dec. 28 through Jan. 3, looking back in five-year intervals:

1904-05: After weeks of uncertainty, Walter C. Booth is retained for a sixth season as head coach. Also, East Coast bias is alleged as Walter Camp makes his All-America selections, with Nebraska's John Bender named to the third team.

1914-15: The Cornhuskers schedule Notre Dame for the first time, starting a series that would see the teams meet every year from 1915 through 1925. Also, Dick Rutherford is elected captain for 1915. 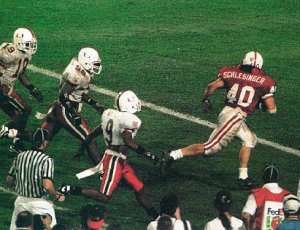 1994-95: The Huskers win their first national title in 23 years by rallying to beat Miami on the Hurricanes' home turf in the Orange Bowl, 24-17. 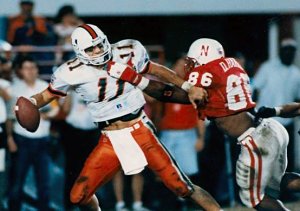 1984-85: Led by quarterback Craig Sundberg, the Huskers dominate the second half for a 28-10 Sugar Bowl win over LSU.

1999-2000: Nebraska grinds out 321 rushing yards to put away Tennessee in the Fiesta Bowl, 31-21. Afterward, Charlie McBride announces his retirement, and Craig Bohl is promoted to defensive coordinator.

2004-05: Charles Bryant, who in the 1950s became Nebraska's first African-American football letterman since 1913, dies at age 71. Also, cornerback Fabian Washington opts to skip his senior season and enter the NFL draft, and running back David Horne is dismissed from the team.

2009: Nebraska holds Arizona to six first downs and 109 yards of total offense in a 33-0 beatdown in the Holiday Bowl.