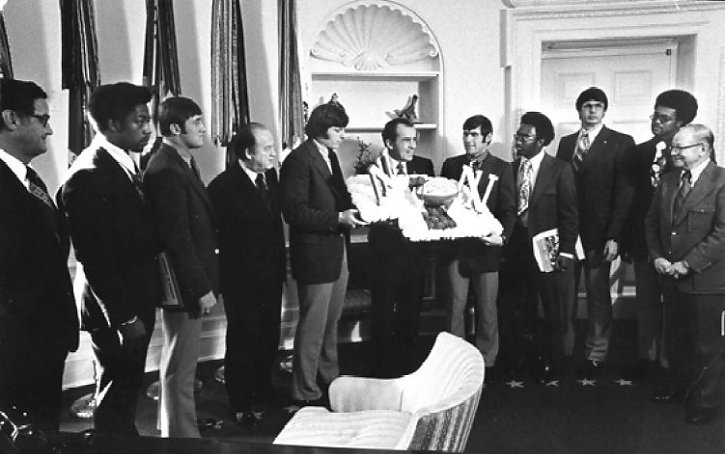 1972: President Richard Nixon hosts members of the 1971 national championship team at the White House, and three seniors – Jerry Tagge, Jeff Kinney and Larry Jacobson – get the news that they have been selected in the first round of the NFL draft. MORE PHOTOS & AUDIO HERE

The week of Jan. 29-Feb. 4, looking back in five-year intervals

1947: Dougal Russell joins the staff as backfield coach after the departure of Glenn Presnell.

1962: Wyoming's board of trustees ends four weeks of suspense and grudgingly releases Bob Devaney from his contract on an 8-4 vote, finally making Devaney's move to Nebraska official. The trustees, prolonging the drama, did not announce their decision until an hour after their meeting adjourned. | More 1962 coverage

1972: Bob Devaney is named coach of the college all-star team for its July 28 contest against the Super Bowl champion Dallas Cowboys.

1992: After a visit to Lincoln on the final weekend before signing day, Tampa Bay-area quarterback Tommie Frazier commits to the Huskers, turning down Notre Dame, Clemson and Syracuse. | 2012 reflections | 1992 recruiting class

2017: Nebraska signs a consensus top-25 class of recruits, including three players who were part of the ballyhooed “Calibraska” movement.