The week of Dec. 14-20, looking back in five-year intervals

1894: Nebraska captain George Dern makes his move to Utah, the first step in a business and political career that would see him become the state's governor and nation's secretary of war. He would miss the team's Christmas Day season finale against the Omaha YMCA.

1904: A Nebraska lawmaker from Hamilton County prepares a bill that would prohibit football in the state. Meanwhile, center Charles T. Borg is elected captain of Nebraska’s 1905 team.

1954: There are a few roster changes as Nebraska practices for its Orange Bowl game against Duke. 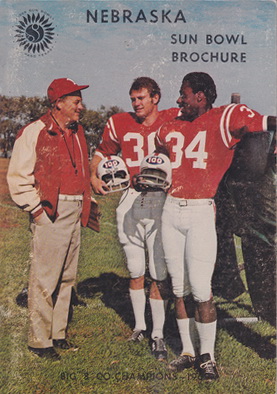 1964: Bob Devaney and his Huskers arrive in Brownsville, Texas, to prepare for Nebraska's Cotton Bowl showdown with Arkansas.

«1969: The Huskers blast Georgia in the Sun Bowl, 45-6, to cap a 9-2 season. Paul Rogers kicked four field goals, all in the first quarter, and the Blackshirts held the Bulldogs to 185 yards of total offense.

1994: Brook Berringer or Tommie Frazier? Coach Tom Osborne says a Dec. 24 scrimmage will be key in determining who starts at quarterback for the Huskers in the Orange Bowl against Miami.

2009: The Big Ten Conference announces it is exploring an expansion, and Tom Osborne says he doesn’t see Nebraska making a move from the Big 12. Also, Ndamukong Suh becomes the Huskers’ first unanimous All-American in 12 years.