The week of Oct. 13-19, looking back in five-year intervals

«1903: The Cornhuskers' 135-pound halfback, Earl Eager, scores twice and Nebraska holds Haskell to 50 yards of offense in a 16-0 win in Lincoln.

1908: A late Minnesota touchdown is nullified by penalty as the Cornhuskers and Gophers battle to a 0-0 tie in Minneapolis.

1913: A pass from Max Towle to Gordon Beck provides the only touchdown as Nebraska upsets Minnesota 7-0 in Lincoln. 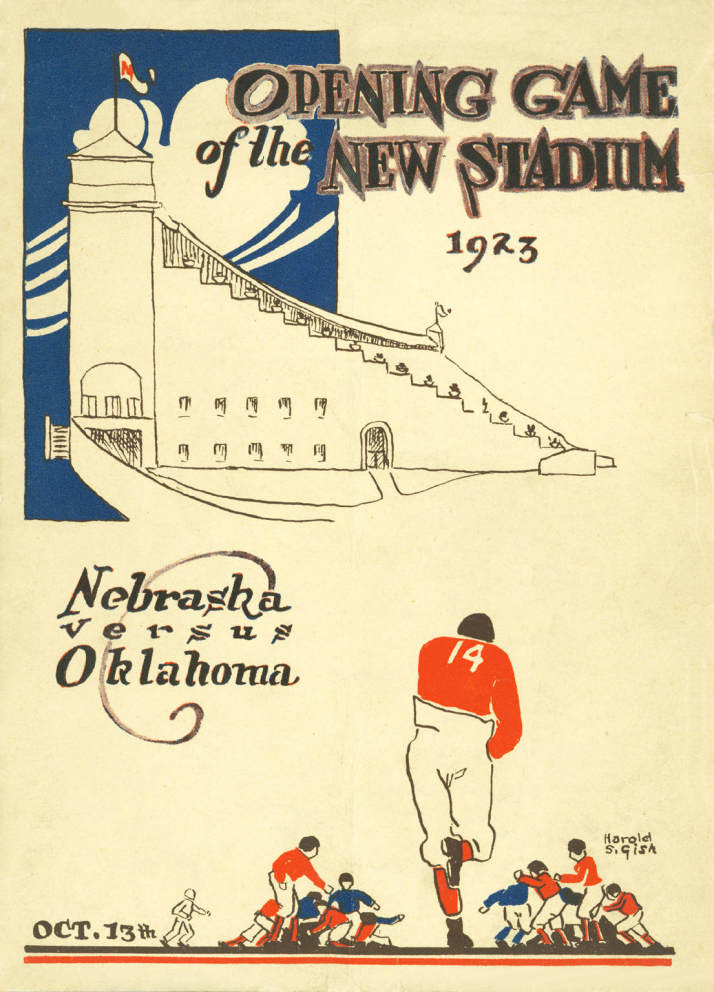 1923: In the first game at Memorial Stadium, a 93-yard fumble return by Douglas Myers early in the fourth quarter helps the Cornhuskers to a 24-0 win over Oklahoma. The Sooners were threatening to cut into the Huskers’ 10-0 lead when Myers made the pivotal play.»

1928: Blue Howell scores all four of Nebraska's touchdowns in a 26-6 win over Montana State.

1933: Coach Dana Bible gives the substitutes considerable playing time in a 20-0 win at Iowa State. The score was similar to the tally of first downs: Nebraska 22, Iowa State 1.

1938: Nebraska squanders several scoring chances as NU and Indiana battle to a scoreless tie in Lincoln. It turned out to be the final 0-0 game in Husker history.

1943: NU loses in Ames for the first time since 1899 as Howard Tippee stars for the Cyclones. Meanwhile, former Husker Harry Hopp, with the Detroit Lions, leads the NFL in scoring as his brother Johnny plays for the Yankees in the World Series.

1953: After trailing at halftime, the Huskers take charge but then need to ward off visiting Miami's fourth-quarter rally to earn their first win of the season, 20-16. Nebraska used just 15 players, including seven starters who went the full 60 minutes. NU's Bob Smith scored on an 80-yard run in the first quarter. | Stats

1958: The Huskers manage just five first downs and 41 yards as they take a 38-0 pounding at Syracuse.

1973: Ten years before making a similar move in a bigger game, Tom Osborne eschews a tie and opts for a two-point conversion try after the Huskers score a touchdown with a minute left at Missouri. The Tigers handed Osborne his first defeat, 13-12, even though Mizzou was outyarded 444 to 170.

1983: Nebraska scores two fourth-quarter TDs to pull away from pesky Missouri in Columbia, 34-13. Also, AP takes a look at what makes the Husker program so strong.

1988: The Huskers jump to a 42-0 lead and then hold off Barry Sanders and Oklahoma State in an offensive shootout at Memorial Stadium, 63-42.

«1993: Former Husker tight end Jerry List and his wife, Susan, are among five people killed in the crash of a single-engine plane near Stuart, Neb. Also, Nebraska gives up a Big Eight record 489 passing yards by Chad May but capitalizes on Kansas State turnovers to register a 45-28 win in Lincoln.

1998: Correll Buckhalter runs for 133 yards and three touchdowns in a 41-0 Homecoming win against Kansas.

2003: Texas A&M turns the ball over eight times, and Nebraska cruises to a 48-12 victory in Lincoln. Also, Kellen Huston is suspended for hitting a fan on the field after the game at Missouri.

2013: Bo Pelini confirms that the knee injury Spencer Long suffered against Purdue will force the all-conference guard to miss the rest of the season.