The week of Sept. 22-28, looking back in five-year intervals:

1903: In just 35 minutes of play, Nebraska rolls to a 64-0 win over Grand Island College to open the season. The Omaha Bee's report said the Cornhuskers enjoyed a lopsided yardage advantage: 780 to 60.

1913: An injury-plagued fall camp has coach Jumbo Stiehm less than optimistic about the Cornhuskers' prospects. (NU would finish the season a perfect 8-0.)

1948: Nebraska's Fred Hawkins, a substitute guard, scores with a recovered fumble to provide the winning margin in a 19-15 victory over Iowa State. It was a bright start to a dreary season, as the Huskers would win just once more in 1948. 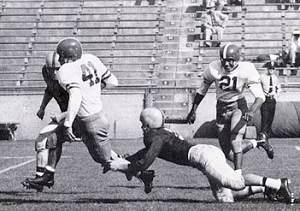 1958: The Huskers get outyarded 381-92 in a 28-0 defeat at at Purdue. Also, quarterback Donald Fuell, a central figure in a recruiting scandal at Auburn, arrives in Lincoln to join the Huskers but then heads back home. He eventually would play for Mississippi Southern (now Southern Miss).

1963: A 65-yard touchdown pass from Dennis Claridge to Tony Jeter in the fourth quarter lifts Nebraska to a 14-7 win at Minnesota.

1968: Paul Rogers' 19-yard field goal with 1:32 left wins it as the Huskers score 10 fourth-quarter points off interceptions to beat Minnesota in Minneapolis, 17-14. 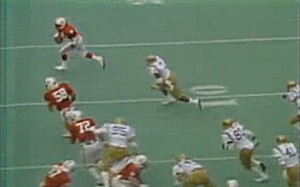 After reversing field, Rozier is chased by Bruins during his sideline-to-sideline jaunt for what officially was a 2-yard touchdown.
«1983: After trailing 10-0 in the second quarter, the Huskers score six unanswered touchdowns, including an electrifying two-yarder by Mike Rozier, to down UCLA, 42-10. The win helps make Nebraska a unanimous No. 1 pick in the AP poll.

2008: The Huskers' fourth-quarter comeback isn't enough as Virginia Tech leaves Lincoln with a 35-30 win. Also, former Husker running back Thunder Collins is arrested and charged with first-degree murder in Omaha.

2013: During a bye week for the Huskers, there are more questions than answers about the health of senior quarterback Taylor Martinez.