The week of Sept. 18-24, looking back in five-year intervals

1901: The Nebraska football program is barely a decade old, but fans already have a reputation for football madness. Meanwhile, the Cornhuskers tune up for the season with a practice game against Lincoln High.

1926: Developing more offensive punch is a priority as the Huskers prepare for the 1926 season.

1931: Nebraska's games against Northwestern and Pitt are slated for national radio broadcasts.

1936: Coach Dana X. Bible suspects his Huskers are being deliberately overhyped by rivals in the Big Six.

1961: The Huskers score their most points in five years as North Dakota falls in the opener, 33-0. Dennis Claridge and Bob Brown were among the sophomores making their Nebraska debuts. | LJS: 1, 2 | Stats 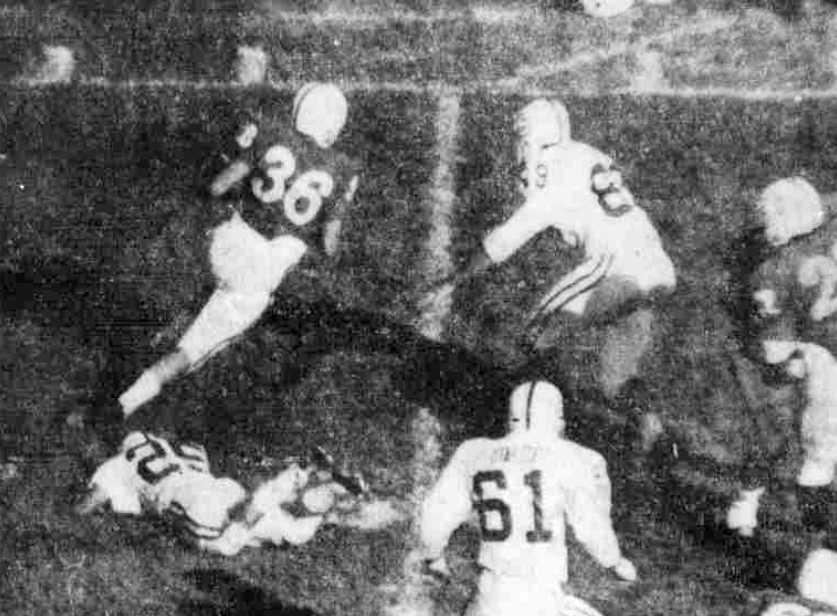 Defensive back Larry Wachholtz (36) did it all against Utah State in 1966 on a day when the offense sputtered. Above, he turns the corner on a 72-yard punt return for a touchdown. He also intercepted two passes and kicked a 39-yard field goal.
1966: Wayne Meylan’s blocked punt and Larry Wachholtz’s long punt return break open a surprisingly tight game midway through the second half as Nebraska fends off Utah State, 28-7.

1971: Jerry Tagge and Johnny Rodgers connect for three touchdown passes, each covering 20 yards or more, to pace Nebraska past Minnesota, 35-7.

1976: Rick Berns and Monte Anthony run for two touchdowns apiece as the Huskers roll at Indiana, 45-13.

1981: Nebraska stuns Florida State with a pair of third-quarter touchdowns just six seconds apart in a 34-14 win in Lincoln. Roger Craig rushed for 234 yards, including a 94-yard touchdown run.

1996: Nebraska's 27-game winning streak comes to a crashing end as Arizona State registers three safeties and shuts out the Huskers, 19-0.

2001: Eric Crouch completes 9 of 11 passes and rushes for 97 yards as the Huskers blast Rice, 48-3, in a game postponed for five days because of the Sept. 11 terrorist attacks.

2006: Marlon Lucky and Kenny Wilson rush for 100-plus yards each in Nebraska's 56-0 dismantling of Troy.

2016: The Nebraska overcomes a pair of costly first-half fumbles and puts away Northwestern, 24-13, behind a 378-yard total offense night from Tommy Armstrong. Also, Bill Glassford, the Huskers' head coach from 1949 to 1955, dies at age 102.