The week of July 17-23, looking back in five-year intervals 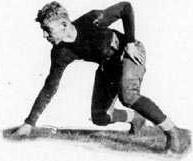 «1931: U.S. Marine Lt. Frank Dailey, a Nebraska halfback in the mid-1920s, describes his role in attempting to hunt down Nicaraguan insurgents led by Augusto César Sandino.

1946: Former Husker Virgil Yelkin is named athletic direcor at the University of Omaha.

1961: Former Husker Pat Fischer makes a good early impression as a rookie in the St. Louis Cardinals’ camp. (He would play 17 NFL seasons.)

1971: Preseason expectations for the Huskers are high, but ABC’s Chris Schenkel is not among those picking Nebraska to repeat as national champions.

1976: Bill Holmes, a Husker monster back from Lincoln, dies in his sleep at age 19. An enlarged heart was determined to be the likely cause of death.

1991: I-back Leodis Flowers says football wasn’t fun anymore, and that’s what led to his exit from the team.

1996: Tom Osborne notifies the NFL that he won’t allow scouts on campus.