The week of Sept. 11-17, looking back in five-year intervals

1901: The Oct. 12 Nebraska game is seen as a tough one for Minnesota. Meanwhile, the Cornhuskers prepare for the season at camp. | Full story

1931: A Nebraska lineman reports an enticement from a player at Montana, where former Husker assistant “Bunny” Oakes is head coach. 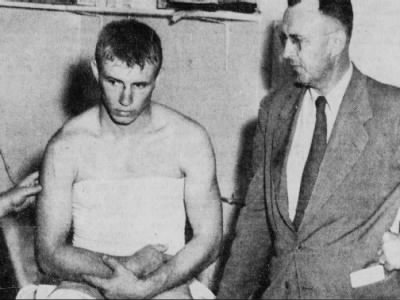 1951: Star running back Bobby Reynolds suffers a shoulder injury during a scrimmage at Camp Curtis and is expected to be out of action for up to six weeks.

1956: Coach Pete Elliott announces that veteran quarterback Don Erway is likely to sit out the season opener because of knee problems. (Erway would miss the entire season and give up football.)

1966: Nebraska overcomes a sputtering offensive effort in a 14-10 win over TCU to open the season.


1971: The Blackshirts keep Dan Fouts and Bobby Moore in check as Nebraska opens the season with a 34-7 victory over Oregon.

1976: Top-ranked Nebraska opens the season by stubbing its toe in a 6-6 tie at LSU. Miscues in the kicking game proved costly.

1981: A year after suffering a 57-0 loss to Nebraska, Iowa uses a stingy defense, turnovers and Reggie Roby's booming punts to send the Huskers to a shocking 10-7 defeat.

1986: Players and coaches are relieved that the Huskers' ticket ordeal with the NCAA is over.

1991: The Huskers manhandle Colorado State, 71-14, registering their second consecutive game without having to punt.

2001: The terrorist attacks of Sept. 11 force postponement of hundreds of sports events, including the Nebraska-Rice game. At the time of the attacks, nobody was in the World Trade Center offices of the Boomer Esiason Foundation, whose staff included former Husker Dave Rimington.

2016: A gritty perfomance by Tommy Armstrong Jr. leads Nebraska to a come-from-behind upset of Oregon, 35-32.