The week of Oct. 6-12, looking back in five-year intervals

1908: Grinnell shows surprising pluck while falling to the Cornhuskers, 20-5, in Lincoln.

«1913: After rebuffing Kansas State’s protest of Clinton Ross’s presence on the team, Nebraska hands the Aggies a 24-6 defeat in Lincoln. More on Ross’s story here.

1923: Legend-to-be Red Grange scores three TDs in his first college game as Illinois downs the visiting Cornhuskers, 24-7. In Lincoln, fans gathered in the Armory to “watch” the game on a Grid-graph.

1928: The Huskers open their first season of Big Six play with a hard-fought 12-0 victory at Iowa State.

1933: In the first meeting between the schools, Nebraska blanks Texas, 26-0, in the season opener in Lincoln. The Huskers outgained the Longhorns 320 yards to 85, and coach Dana Bible cleared the bench. George Sauer scored twice and intercepted a Texas pass. Late in the third quarter, sophomore Gerald LaNoue scored on a 13-yard run, his first carry as a Cornhusker. | Play by play

1938: A safety on a blocked punt proves crucial as Iowa State gets its first win over NU since 1919 in an 8-7 decision in Lincoln. A 30-yard TD pass from Harry Hopp to Ray Prochaska pulled Nebraska within one point early in the fourth quarter, but an interception and a blocked field goal thwarted subsequent Husker chances.

1943: Nebraska surrenders six touchdown passes to Bob Hoernschemeyer in a 54-13 loss to Indiana before just 8,000 fans in Memorial Stadium. Hoernschemeyer completed 14 of 19 passes for 345 yards as the Hoosiers outyarded NU by 585-203, the Sunday Journal and Star reported. It was the second week in a row the Huskers yielded exactly 54 points, and they would do it a third time before the month was out.

1948: Conference newcomer Colorado upsets the Huskers in Boulder, 19-6. The Huskers were "outclassed ... in every department, including fight and spirit," the Sunday Journal and Star's Norris Anderson wrote. Nebraska's only score came on a one-yard drive following a blocked punt by Charley Toogood.

1953: Fumbles damage Nebraska’s chances in a 14-6 loss at Pittsburgh. Favored by two touchdowns, Pitt scored on a one-yard run as time expired to increase its winning margin from one point to eight.

1958: The Huskers fall behind early and never recover in a 23-6 home loss to Kansas State. Nebraska's only score came on a 22-yard fumble return by Dick McCashland in the third quarter. 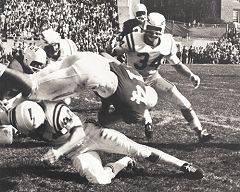 Dennis Claridge loses the ball after a gain, and Air Force’s Ken Jaggers dives for the recovery.
1963: Air Force upsets the Huskers in Lincoln, 17-13, the only blemish on Nebraska’s 1963 record.

1968: Bobby Douglass drives No. 6 Kansas to a go-ahead score with less than 5 minutes remaining as Nebraska falls to the Jayhawks in Lincoln, 23-13.

1973: Frosty Anderson’s three TD receptions, including a 67-yarder, pace Nebraska to a 48-7 win at Minnesota.

1978: After losing to Iowa State in the previous two seasons, NU holds the Cyclones to 82 total yards in a 23-0 victory in Ames.

1983: With the “Scoring Explosion” fizzling for an afternoon, the Huskers receive their first scare of the season but hang on for a 14-10 win at Oklahoma State. 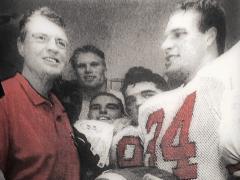 1998: Second-ranked Nebraska’s fourth-quarter rally comes up short in a 28-21 loss at Texas A&M. It is the Huskers’ first defeat in regular-season conference play since 1992.

2003: Trailing by 10 after three quarters, Missouri explodes for four touchdowns in the final period in Columbia and hands the 2003 Huskers their first loss, 41-24.

2013: Nebraska throttles Purdue, 44-7, shutting out the Boilermakers until the game's final minute.