The week of Oct. 12-18, looking back in five-year intervals

1899: The season opens with a 6-6 tie with the Kansas City Medical College. It was a marked improvement from the previous year’s result, a 24-0 Nebraska loss. | Full story

1904: Nebraska dominates Creighton, 39-0, before a crowd of 3,500 in Omaha. It was the first of three games between the schools – all shutout victories for the Cornhuskers. | Full story

1919: George Gipp* stars as Notre Dame holds off Nebraska, 14-9. Notre Dame scored with some razzle-dazzle on the opening kickoff.

«1924: John “Choppy” Rhodes (left) scores twice on “sensational sprints” and the Huskers get two touchdowns on interception returns in a 33-7 romp over Colgate. The visitors somehow had a slight edge in total offense.

1934: For the second year in a row, a missed PAT by Iowa’s Russ Fisher is the difference as Nebraska edges the Hawkeyes, 14-13. There was no scoring until the third period, when Lester McDonald's leaping grab of a Henry Bauer pass gave NU a lead it would not relinquish. The game was tense until the final play, when the Huskers batted down Iowa's last-gasp pass.

1939: A 30-yard Herm Rohrig field goal and a 14-yard run by Walter Luther pace Nebraska to a 10-7 win at Iowa State. A blocked punt set up Iowa State’s only score, a 1-yard TD plunge in the fourth quarter. 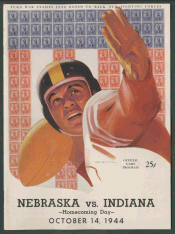 «1944: Nebraska musters just one first down in a 54-0 shellacking at Indiana.

1949: The Huskers are held to 25 yards of total offense — still the lowest total on record at Nebraska — in a 22-7 loss at Penn State. NU’s only score came on Ron Clark's 82-yard punt return.

1959: Indiana takes advantage of a disastrous start by butter-fingered Nebraska and cruises to a 23-7 win in Lincoln. The Huskers were outyarded 419 to 76, but they did put together a 90-yard, penalty-aided drive capped by a 19-yard TD pass from Harry Tolly to Carroll Zaruba.

1984: The defense scores twice — a Ken Graeber safety and a Marc Munford interception return — to help turn back Missouri, 33-23.

1989: Nebraska scores on the game’s first four possessions — its first two and Missouri’s first two — and cruises to its most lopsided win ever in Columbia, 50-7.

1994: With third-team quarterback Matt Turman starting for the Huskers, the Blackshirts shut down Kansas State's high-flying offense in a 17-6 win in Manhattan

2014: Nebraska uses a dominant second-half defensive effort to down Northwestern on the road, 38-17.