The week of Aug. 28-Sept. 3, looking back in five-year intervals:

1901: Maybe this is why it’s called preseason camp: The team gets set for work at South Bend, Neb., where “the men will live in tents along the Platte river.” | Full story

1906: A new coach and a later start are among the changes in place as the Cornhuskers prepare for the start of preseason drills. | Full story 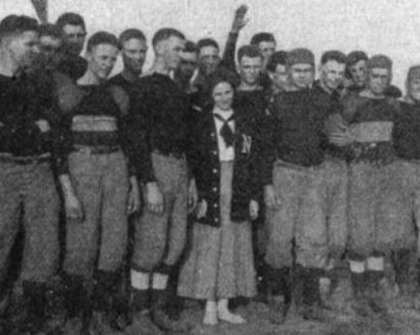 1916: Nebraska alum Cozette McManigell Brannon is believed to be the nation’s first female college football coach as she takes charge of the second team at Jonesboro Agricultural College (now Arkansas State), where her husband coaches the varsity.

1946: War-depleted rosters are a thing of the past as the Huskers report for preseason drills: 1, 2

1951: Inexperience on the offensive line dims the Huskers' hopes of duplicating the success of 1950. Meanwhile, players begin the preseason grind at Camp Curtis and receive inspirational words from former coach Fred Dawson.

1971: Nebraska and Oklahoma are declared the prohibitive favorites in the Big Eight race. Meanwhile, the Huskers elect Green Bay co-captains.

1976: Former Husker fullback Tony Davis creates a stir with his comments that Nebraska is too conservative on offense and defense to win a national championship.

1981: Inexperience at quarterback looms as a big question mark for the ’81 Huskers.

1986: The NCAA orders one- or two-game suspensions of five dozen Huskers for misuse of game tickets, and coach Tom Osborne says the team may have to forfeit its opener against Florida State.

1996: Nearly a year after being assaulted by Lawrence Phillips, Kate McEwen decides to leave the women’s basketball team and focus on earning her degree. Also, a lawsuit filed by McEwen against Phillips is unsealed.

2001: The Blackshirts shine in the second half and Dahrran Diedrick rushes for 177 yards in his first career start as Nebraska shuts down Troy State, 42-14.

2006: The offense clicks on the ground and in the air in a season-opening 49-10 win over Louisiana Tech.

2011: Nebraska's new offense gets off to a slow start in a 40-7 victory against outmanned Chattanooga.

2016: After a sluggish first half, the Huskers take control for a 43-10 season-opening win over Fresno State.