The week of Sept. 28-Oct. 4, looking back in five-year intervals:

1909: NU salvages a 6-6 tie with South Dakota on a Buck Beltzer touchdown with seven minutes left.

1914: Nebraska converts a fumble recovery deep in Washburn territory into the winning TD in a 14-7 victory.

1919: New coach Henry Schulte's Huskers open the season on the wrong end of an 18-0 score at Iowa. 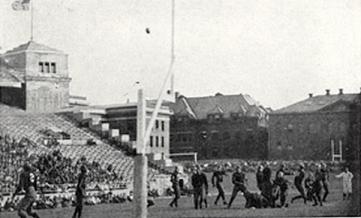 Illinois’ winning kick against Nebraska in 1924.
1924: Nebraska gives Red Grange and Illinois a tough battle before losing on a fourth-quarter field goal.»

1939: The Huskers save their best for the last five minutes as they rally for a 7-7 tie with Indiana.

1944: Nebraska opens the season by taking a 39-0 drubbing at Minnesota. NU was outyarded 363-37, gained just two first downs and was minus-five in turnovers. After a 33-0 first half, UM coach George Hauser took his foot off the gas pedal, at one point even ordering a punt on first down at the Nebraska 29. 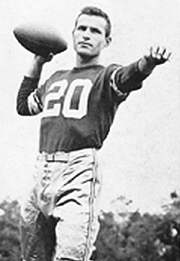 «1949: Fran Nagle passes for 194 yards, but heavily favored Minnesota prevails in Lincoln, 28-6. NU's touchdown came on a 12-yard pass from Nagle to Ralph Damkroger to cap an 80-yard drive in the third quarter.

1954: Strong play by Nebraska's second unit breaks open a tie game in the fourth quarter as NU registers a 39-14 win over Iowa State. Dennis Korinek had 121 yards on seven rushes, including a 70-yard TD jaunt.

1959: A touchdown shortly before halftime holds up for a 7-6 win over Oregon State. After OSU drove 88 yards for a third-quarter TD, coach Tommy Prothro opted for a two-point try, but fullback Jim Stinnette was stopped short by George Haney, Jim Moore, Don Purcell and John Ponseigo.

1964: After QB Fred Duda suffers a broken leg, Bob Churchich leads the Huskers to a 14-7 win at Iowa State. 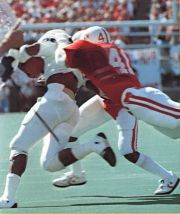 «1979: After trailing 14-0 in the first quarter, Nebraska roars back for a 42-17 win over No. 18 Penn State. Linebacker Kim Baker, left, was part of a defensive effort that stymied PSU in the final three quarters.

1984: A year after losing by eight touchdowns to the Huskers, Syracuse upsets Nebraska, 17-9.

1989: Nebraska records 11 quarterback sacks but has trouble putting away Oregon State in a 35-7 victory.

1994: Wyoming gives the Huskers all they can handle in a 42-32 Nebraska win. Quarterback Brook Berringer played on with a partially collapsed lung.

2009: The Huskers are ranked No. 1 nationally in scoring defense as they prepare for their Thursday night game at Missouri. Meanwhile, Mizzou coach Gary Pinkel hops into a helicopter to woo Husker QB commit Tyler Gabbert.

2014: Stymied for three quarters, Nebraska nearly overcomes a 24-point deficit in the final period but can't quite complete the comback in a 27-22 loss at Michigan State.