This week month in
Husker history

It's a slow news month, so we are breaking from convention and covering all of June as we look back in five-year intervals:

1919: Nebraska's split from the Missouri Valley Conference becomes closer to reality. The Huskers would spend two seasons as an independent before rejoining the league in 1921.

1924: Marvin “Red” Layton, a former Husker fullback and current NU hurdler, stows away on the U.S. Olympic team's ship to the 1924 Olympics in Paris in hopes of competing in the Games.

1929: Wedding bells are about to ring for former Husker coach Fred Dawson. Dawson coached at Denver after his stint at Nebraska from 1921 to 1924. 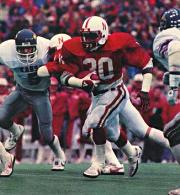 «1984: The Houston Oilers take Mike Rozier with the No. 2 pick in the NFL supplemental draft. Rozier had already played almost a complete season for the Pittsburgh Maulers of the USFL. | Huskers in NFL draft

1989: A rivalry loses some oomph as Barry Switzer resigns as coach at Oklahoma, citing NCAA rules that do not "recognize the financial needs of young athletes."

1994: School presidents of the future Big 12 Conference vote to curtail the enrollment of Proposition 48 athletes.

1999: Husker quarterback signee Carl Crawford opts for baseball after being taken in the second round of the Major League Baseball draft by the Tampa Bay Devil Rays.

2004: Eric Crouch, trying to make it in the NFL as a safety, is waived by the Packers.