The week of Sept. 4-10, looking back in five-year intervals

1901: Dispatches from South Bend, Neb., provide glimpses of the goings-on at preseason camp, where the diversions include fishing and rifle practice and there’s plenty of fresh milk from Farmer Straith’s cows: 1, 2

1906: New coach Amos Foster says speed will be essential as college football operates under revolutionary new rules, including legal forward passes and an extra five yards to gain for a first down. | Full story

1936: The Huskers boast a strong backfield – Lloyd Cardwell, John Howell and Olympian Sam Francis (pictured) – as they start preparations for the 1936 season.

1946: Freshman Tom Novak's elevation to the first team is among the roster moves made by new coach Bernie Masterson after the first week of practice.


1951: Nebraska enters the season ranked No. 12 by AP, and the Huskers’ home game against Colorado in November is slated for a regional telecast.

1961: Ten days before the start of the fall semester, Nebraska loses a down-to-the-wire recruiting battle as Omaha Central’s Gale Sayers reverses field and opts to enroll at Kansas.

1966: Quarterback Bob Churchich sparkles as the Huskers scrimmage one week before their season opener against TCU. 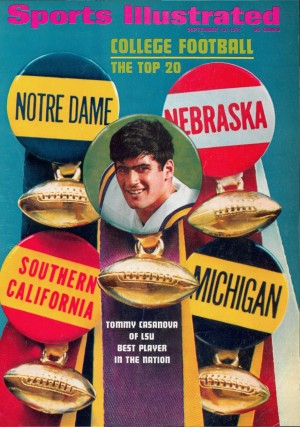 1971: Sports Illustrated runs a big feature on Bob Devaney but ranks his defending national champs No. 2 behind Notre Dame.

1976: The Huskers practice under the lights at Seacrest Field in preparation for their nighttime opener at LSU.

1986: Sparked by Steve Taylor on offense and a stifling Blackshirt defense, Nebraska scores 24 unanswered points in the second half for a 34-17 win over Florida State. It was the first night game in Memorial Stadium history, and it came after an eligibility issue involving dozens of Huskers was ironed out.

1991: Keithen McCant comes off the bench at quarterback and leads the Huskers to a 59-28 win over Utah State. Nebraska piled up 617 rushing yards and an NCAA-record 44 first downs.

1996: Despite being held to 184 yards rushing, Nebraska throttles Michigan State, 55-14, taking advantage of two defensive touchdowns and one on special teams. Meanwhile, the Huskers’ image problems aren’t over

2001: The Blackshirts hold Notre Dame to 162 total yards in a 27-10 win in Lincoln. Nebraska was playing its third game of the season but Notre Dame just its first.

2006: Nebraska blasts Nicholls State, 56-7, in a tuneup for the big game against Southern Cal.

2011: Fresno State exploits a leaky Husker defense, but Nebraska rallies in the second half for a 42-29 win.

2016: The Huskers pick off five passes from future NFL star Josh Allen in a 52-17 win over Wyoming in a game that Nebraska led by just seven points entering the fourth quarter