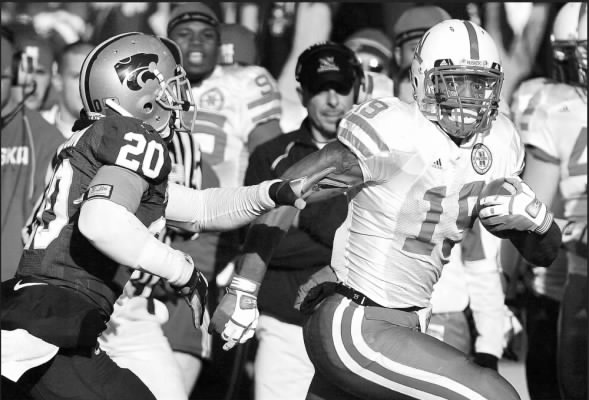 Huskers breeze past ’Cats with 600-plus yards

Joe Ganz rushed for a career-high 95 yards while adding 270 yards through the air to lead a balanced Nebraska offense in the Huskers’ 56-28 victory over Kansas State in Manhattan.

Ganz scored twice on the ground and threw for two more scores while directing a Nebraska offense that amassed over 600 total yards. His 270 yards passing gave him 3,103 yards through the air this season, as he joined Zac Taylor as the only quarterbacks in school history to throw for 3,000 yards in a single season.

The Huskers’ rushing game was the highlight of Saturday’s strong offensive performance. Ganz rushed for a game-high 95 yards on only 11 carries as NU finished with a season-high 340 yards rushing. Roy Helu Jr. added 72 yards and two touchdowns on 13 carries, while Marcus Mendoza tallied 58 yards, Quentin Castille added 51 yards and Marlon Lucky finished with 47.

The Wildcats managed just 247 total yards, and 14 of their 28 points came via defensive and special teams touchdowns.

The Huskers have proven to be a resilient bunch, bouncing back nicely after blowout losses to Missouri and Oklahoma.

There wasn’t much drama. But there was plenty of sweet irony as Nebraska’s 56-28 victory over Kansas State played out.

Ganz seems to maximize every once of talent he has. All season long, Joe has been the sparkplug of the Husker offense.