This week month in
Husker history

1929: How did Nebraska football end up in the August issue of Popular Mechanics? It was because of assistant coach B.F. Oakes and his “Biff’em machine,” a predecessor of the blocking sled. 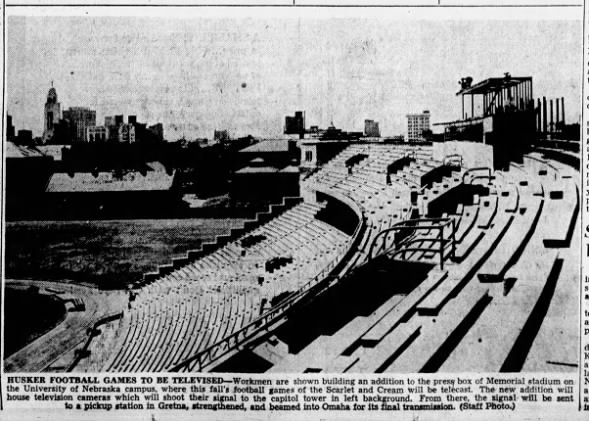 1949: As commercial television dawns in eastern Nebraska, the Memorial Stadium press box is readied for telecasts of the Huskers' home football games by Omaha station WOW-TV. (The station would also televise the Huskers' 1950 home games, but the practice would be halted in 1951.)

1969: Former Husker Paul Critchlow suffers severe leg injuries from an enemy grenade in Vietnam. (He would revisit the scene of the Aug. 19 incident 31 years later.)

1984: The Huskers have some big shoes to fill on offense, but Tom Osborne says he is not concerned.

1989: Tom Osborne expresses surprise at the Huskers' No. 3 preseason ranking.

1994: Hopes are high heading into the season, and a 31-0 win over West Virginia gets things rolling.

2004: Change is in the air as Bill Callahan's first Husker team prepares for its opener.

2009: Junior I-back Quentin Castille, the Huskers’ leading rusher in the Gator Bowl win over Clemson, is dismissed from the team.

2014: The offense rolls to the tune of 35 first downs and 784 yards of total offense in a 55-7 romp over Florida Atlantic in the season opener. Also, Fran Nagle, Nebraska quarterback in 1949 and ’50 and a former World War II prisoner of war, dies at age 90.