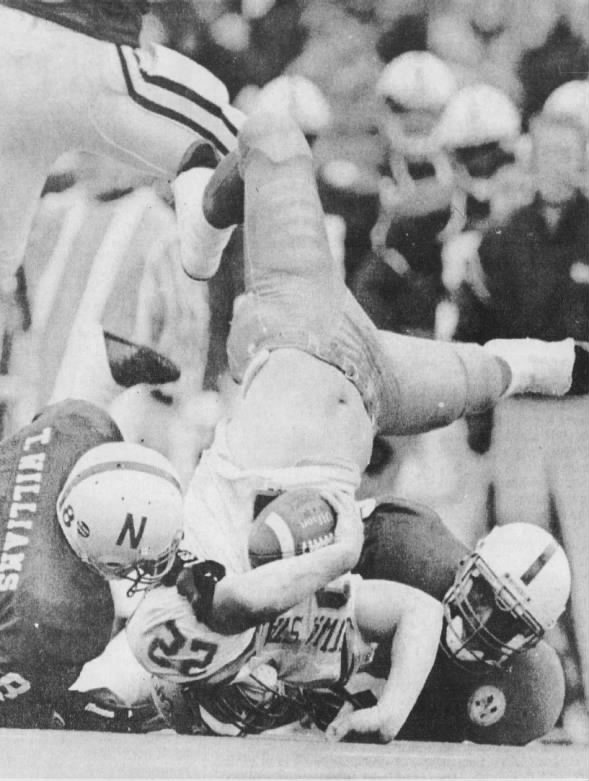 Nebraska clinched its third consecutive Big Eight Conference crown and Orange Bowl berth with a 49-17 win over Iowa State in Lincoln. The Huskers gained ground in terms of national respect as they moved up to No. 2 in the coaches poll and to No. 3 in the AP and Bowl Coalition polls.

Nebraska’s Tyrone Williams recovered a fumble on the opening kickoff and again on Iowa State’s first play from scrimmage, which the Huskers converted into quick scores to rush out to a 14-0 lead with 12 minutes remaining in the first quarter.

Calvin Jones and Tommie Frazier combined for over 400 yards of total offense as both rushed for over 100 yards, the Huskers’ second double-100 day of the season. Frazier recorded his second 100-plus day with 125 on the ground and tied his career high with three rushing TDs. He also completed 4 of 10 passes for 68 yards and another score, a 10-yard pass to Gerald Armstrong, to put the Huskers up 21-0 with 8:23 remaining in the first quarter.

Jones moved up to No. 2 on the Husker career rushing list and became just the third Husker and the 15th player in the Big Eight to compile over 3,000 rushing yards. He averaged eight yards per rush en route to 208 yards on the ground.

As a team, Nebraska rushed for over 400 yards for the first time in 1993 and took over as the nation’s No. 1 rushing team.

Butkus finalist Trev Alberts tied the school record for sacks in a season and broke the school career record for tackles for loss as he had 10 tackles, one sack and three tackles for loss. Ed Stewart was Nebraska’s nominee for Big Eight Defensive Player of the Week as he totaled 14 stops, 10 solo.