The week of Aug. 14-20, looking back in five-year intervals

1901: Plans are made to start two weeks of training camp on Sept. 1 near South Bend, Neb.

1941: Bob Russell gets set for his final season as Nebraska football's radio play-by-play man. Lyell Bremser, his assistant in the booth, would take over in 1942. 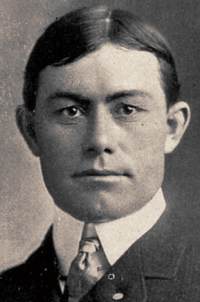 1951: Thanks to a football profit of over $190,000, the Athletic Department registers a net gain of more than $74,000 for the recently concluded fiscal year. Meanwhile, 54 players are invited to participate in fall camp at Curtis, Neb., starting Aug. 30

1971: A three-way race for the top quarterback spot is shaping up as the team reports for fall camp.

1981: Tom Osborne says the 1981 defense might be even better than the previous year's No. 3-ranked unit.

2001: September court dates are set for Dahrran Diedrick and Tony Tata after they land in the slammer on disturbing-the-peace charges. A disciplinary decision by Frank Solich is expected soon.

2011: The Bubba Starling saga ends as the two-way sports star signs with the Kansas City Royals. Also, Nebraska starts at No. 10 in the Associated Press poll.

2016: The university announces a four-game suspension for receivers coach Keith Williams after his DUI arrest.