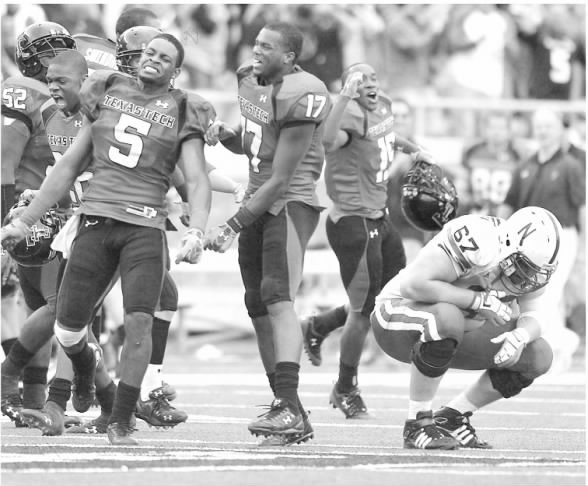 Red Raiders down Huskers in overtime

Nebraska took No. 7 Texas Tech down to the wire and beyond, but an interception on the Huskers’ lone drive in overtime ended NU’s upset hopes in a 37-31 loss at Jones Stadium.

In overtime, Nebraska special teams captain Jake Wesch, who earlier had completed an eight-yard pass on a fake field goal to keep NU’s first touchdown drive of the fourth quarter alive, called heads to win the toss. NU chose to play defense, and Texas Tech scored on a reverse play from two yards out just four plays later. But Donnie Carona’s extra point was blocked by Zach Potter to leave the Huskers 25 yards from victory.

On NU’s possession, Ganz overshot wide receiver Nate Swift on his first attempt before running from heavy pressure on the Huskers’ second play of the drive. Ganz flipped the ball up the field in an attempt to avoid the sack, but his pass was intercepted by Texas Tech to end the game and NU’s hopes for an upset. The interception was the only turnover of the game by either team, and it ended an otherwise impressive performance by Ganz.

This was something that Nebraska football fans were looking for from Bo Pelini – an inspired, overachieving performance against a team with superior talent.

If the offense that showed up at Jones AT&T Stadium continues to make the bus, Nebraska will get three more wins — and then some.

The thing is, the Huskers played a magnificent game of keep-away. ... Shawn Watson devised a brilliant game plan on offense and it was executed well.

Even in the loss, the Huskers had to come away with renewed faith that they can indeed compete with top-10 opponents and run with the Big 12 Conference’s elite.

Those who want to blame Joe Ganz for Saturday’s loss at Tech need to think again. ... The Huskers would never have made it into the overtime period had it not been for #12.

It is obvious that there is no quit in this team.

Leach’s wacky ways on the surface ... have built into his players what every football coach on this planet wants: Confidence.