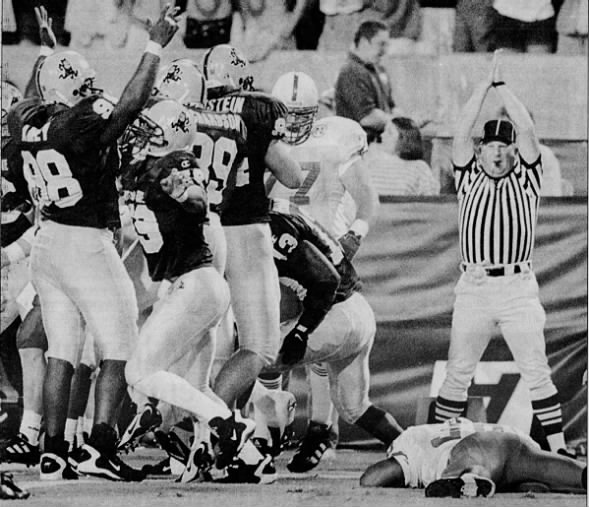 Even the best have bad days. Top-ranked Nebraska found that out the hard way when it visited 17th-ranked Arizona State.

A fired-up and opportunistic Sun Devil defense held the Huskers scoreless, while the ASU offense had a big first half en route to a 19-0 win that shocked the college football world.

The Sun Devils set the tone early, marching the opening kickoff 80 yards for a score and a 7-0 lead. Nebraska sputtered on its opening drive and gave up a safety, which gave Arizona State a 9-0 lead. And so it went for the rest of the evening. The Husker offense never got untracked, while ASU took advantage of its scoring opportunities.

The shutout marked the first time in 51 games an NU team was held scoreless, dating back to the 1992 Orange Bowl. The loss also snapped several incredible streaks by the Huskers, including 26 straight wins overall and 37 consecutive regular-season victories.

Linebacker Jamel Williams was a standout in the loss, recording 17 tackles, the most stops by a Husker since 1983. Defensively, the Huskers allowed 401 total yards, but only 103 after halftime. The defense allowed just 13 points as the Sun Devil defense recorded three safeties.

ASU gave up 42 points two weeks ago. That's not a championship defense, but we made it look like one.

It's time to say it: Maybe this offensive line isn't all it's cracked up to be.