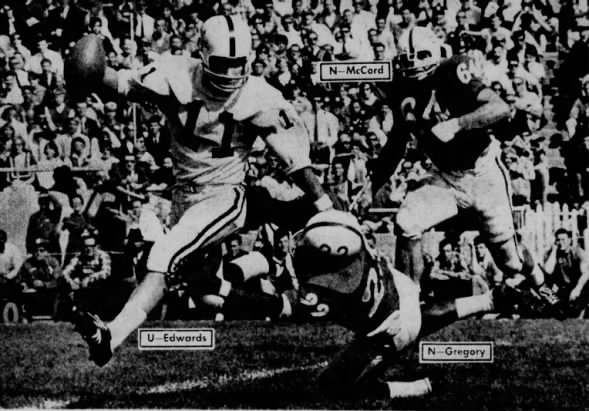 All America safety Larry Wachholtz and All America middle guard Wayne Meylan teamed to snap Utah State’s spine as the Cornhuskers took a 28-7 win before a record Band Day crowd of 63,543.

It was a 7-7 cliff-hanger until Wachholtz kicked a 44-yard field goal with 46 seconds left in the third quarter. Then things happened fast.

Meylan blocked an Aggie punt to give the Huskers the ball at the US 8. Three plays later Ron Kirkland scored to make it 16-7. Wachholtz supplied the clincher the next time the Aggies punted. He reeled off a 72-yard TD return, his career first, to dash Utah State upset hopes.

Nebraska got an early TD when Charlie Winters scored from the 2 after a 31-yard drive which started following a 36-yard Wachholtz punt return. The 7-0 lead held up until a Husker punt accidentally touched Ben Gregory and Utah State recovered at the NU 38.

A 32-yard pass set up the USU tally with 12:44 left in the third. Then the Huskers exploded.