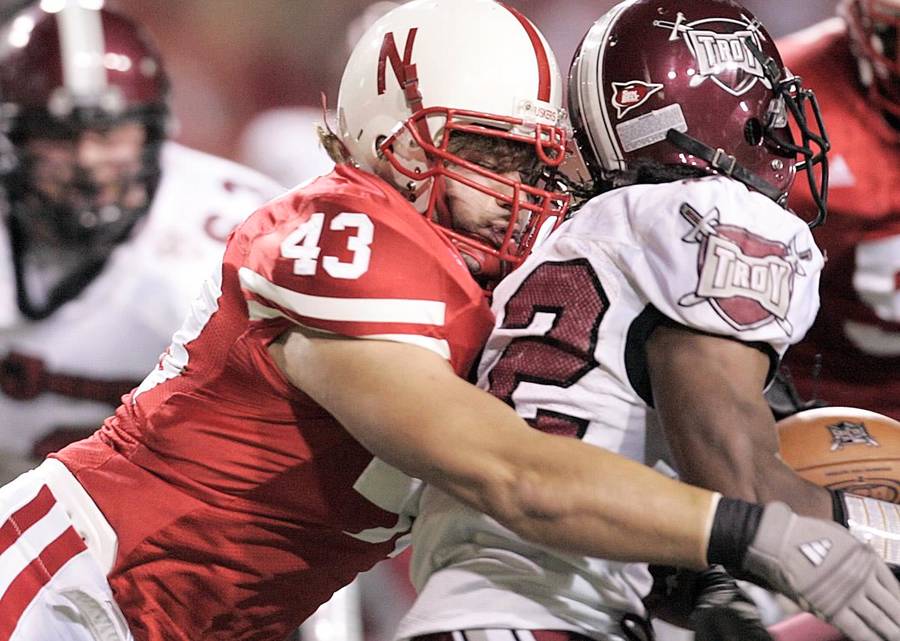 Ty Steinkuhler had four unassisted tackles and a forced fumble. | Courtesy of Huskers.com

The Nebraska offense generated nearly 600 yards total offense, including more than 400 in the first half, and the Blackshirts pitched their first shutout since 2003 as the Cornhuskers rolled to a 56-0 victory over Troy.

Sophomore I-back Marlon Lucky erupted for the best game of his young career with 10 carries for career highs of 156 yards and three touchdowns. Lucky’s big night included successive career-long runs of 34, 45 and 51 yards that all went for touchdowns, capped by his 51-yard burst up the middle on his final carry to give the Huskers a 35-0 lead on Nebraska’s opening drive of the second half.

Senior quarterback Zac Taylor propelled the Huskers through the air, completing 14 of 17 passes for 268 yards and one touchdown. Taylor played just over a half, giving way to backup Joe Ganz after the Huskers’ fifth touchdown.

Junior wide receiver Terrence Nunn enjoyed a career night as well with his first 100-yard receiving game, which included a 67-yard catch in the first half.

I-back Kenny Wilson added a career rushing night of his own with 106 yards and two touchdowns on 19 carries, including the Huskers’ final score midway through the fourth quarter to close out Nebraska’s most lopsided victory since a 59-0 pounding of Baylor in 2000.

The Huskers looked focused, inspired and ready to put L.A. in their rearview mirror.

Saturday’s game didn’t exactly provide the Huskers and Callahan with a mulligan. But it did give everyone a chance to show they’ve got each other’s backs covered.

Callahan continued to show that his commitment to the running game this season is no passing fancy.

The Troy game was nearly flawless across the board — a great way to bounce back.

Troy quarterback Omar Haugabook should be getting regular visits from NU senior Adam Carriker and sophomore Ndamukong Suh in his nightmares.