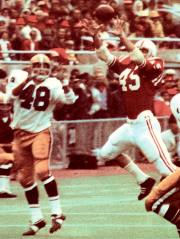 Johnny Rodgers caught three Jerry Tagge passes to propel Nebraska to a 35-7 victory over Minnesota before record crowd of 68,187 fans. The win was No. 21 without a defeat for Nebraska, and the Huskers’ seventh straight over Minnesota.

Tagge hit Rodgers with a 28-yard scoring pass to open the scoring in the first period, and a one-yard blast by Jeff Kinney made it 14-0 at the quarter.

After Minnesota pulled up 14-7 in the second quarter on Jim Henry’s six-yard run, Tagge marched the Huskers 80 yards to score just before the half. Kinney got his second TD on a two-yard plunge.

In the third quarter, Tagge hit Rodgers with strikes of 20 and 37 yards to get Johnny in the receiving book (tying Clarence Swanson’s 1921 record) and himself in the passing archives (tying Bob Churchich’s 1966 Orange Bowl mark).

Tagge’s 233 yards of total offense and Rodgers’ 126 yards in receptions were the individual highlights as No. 1 ranked Nebraska made it 2-0.

H’MAX NOTES: Police scuffled with gate-crashers at the southeast end of the stadium.