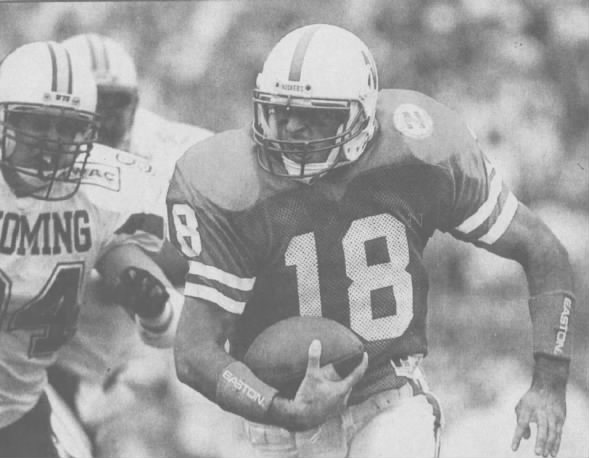 Brook Berringer runs past Wyoming’s Jim Talich on his way to a touchdown in the second half. · Odessa American · Newspapers.com

With quarterback Tommie Frazier sidelined by blood clots, Brook Berringer earned his first career start and led the Huskers to their first come-from-behind victory of the season, a 42-32 win over Wyoming.

Nebraska was down 21-7 with 2:12 left in the first half after two Husker turnovers led to two Wyoming scores, but Berringer orchestrated a 2-minute drill beginning at the NU 36-yard line, completing seven straight passes for 59 yards, and scored on a 5-yard jaunt to cut the lead to 21-14 at halftime.

Berringer directed four consecutive scoring drives during a seven-minute span of the second and third quarters, unknowingly playing with a partially collapsed lung, which occurred during his TD run late in the first half. With 8:11 left in the third quarter, the Huskers’ 14-point deficit had turned into a 35-21 lead. Nebraska then fended off a Wyoming rally to secure the victory.

READ MOREHIDE
The Cowboys passed for a season-high 344 yards to NU’s 131 but were held to 36 rushing yards. Wyoming’s Ryan Christopherson entered the game averaging 152 yards per game but had zero yards on 12 carries.

Berringer completed 15 of 22 passes for 131 yards. He rushed 12 times for 74 yards and three touchdowns.

Ed Stewart led the NU defense with 12 tackles while Barron Miles picked off two passes and Tyrone Williams one. 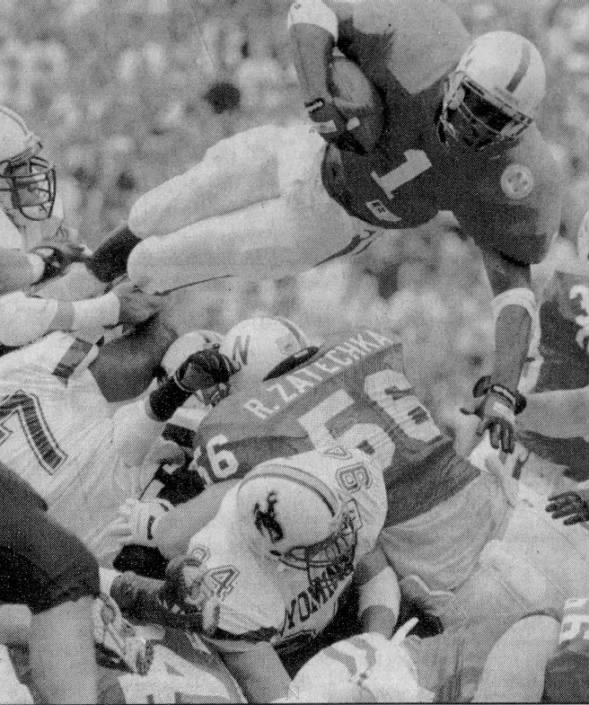 Berringer put the team on his back and carried it out of an unthinkable fate.

The big question was how Brook Berringer would respond to the pressure of stepping in for Tommie Frazier. After a slow start, Berringer's performance was admirable, if not exceptional.

UW's outstanding veteran defense was done in not by the opposition, but by its own youthful offense and special teams.