Cardwell, McDonald and Francis would all be first-round NFL draft picks after the 1936 season. Francis was the 1936 Heisman runner-up and is in the College Football Hall of Fame.

Cardwell, McDonald and Francis would all be first-round NFL draft picks after the 1936 season. Francis was the 1936 Heisman runner-up and is in the College Football Hall of Fame.

Three future Husker stars made a splash in their sophomore debuts as Nebraska throttled a bigger but slower Wyoming squad, 50-0, in the season opener in Lincoln. Halfback Lloyd Cardwell and end Lester McDonald scored two touchdowns apiece, and fullback Sam Francis tallied another.

The Memorial Stadium crowd of about 15,000 was treated to a more wide-open offense than usual, with the Huskers making liberal use of passes and laterals. According to the Sunday Journal and Star's count, Nebraska had advantages of 436-64 in total yards and 27-2 in first downs. Although he didn’t score, junior halfback Jerry LaNoue was a standout because of his elusiveness on punt returns.

Placekicking was NU’s only glaring shortcoming, with just two of eight extra point attempts converted. The Lincoln paper’s Cy Sherman cautioned, however, that the Huskers also “showed weakness” at times in their tackling and defensive line play, which he said would need to be addressed with powerful Minnesota looming next on the schedule.

It was a bleak homecoming for Wyoming coach Willard “Dutch” Witte. The Lincoln native earned three letters at quarterback at Nebraska in the late 1920s.
• More coverage: Omaha World-Herald | AP 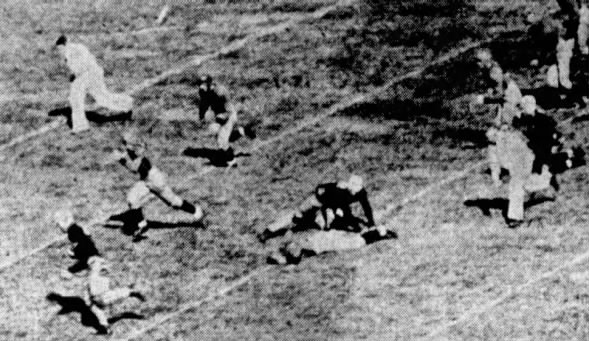