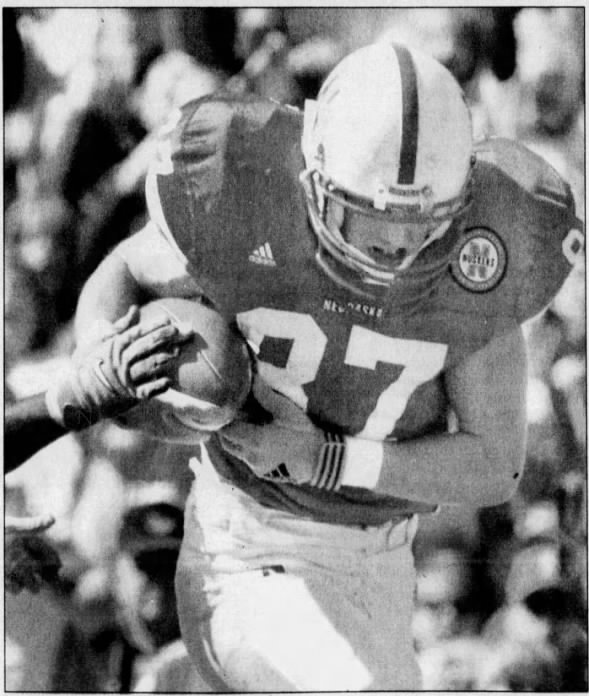 Tracey Wistrom runs for a long gain on a first-quarter reception The Columbus Telegram · Newspapers.com

Nebraska didn’t like it that Oklahoma State had a better defensive ranking, and it certainly showed.

Nebraska’s defense made its statement early, setting up three first-quarter touchdowns in the No. 5 Cornhuskers’ 38-14 win Saturday. The Huskers allowed just 45 yards – all rushing – in the first half and shut out the Cowboys for nearly three quarters.

“We had to prove to them that our defense was No. 1 – not their defense. I think we proved our point,” said linebacker Julius Jackson, who had one of two Nebraska sacks. “I don’t think it’s any different from any other week. We come in with a good game plan, we execute and we shut them out.”

The Cornhuskers were more concerned after the game with a few big plays in the second half that balanced out the statistics.

“In the first half we were awesome. In the second half we (weren’t),” rover Mike Brown said. “I know this defense is better than that. I’m pretty disappointed the way we played in the second half.”

Still, the Cornhuskers (5-0 overall, 2-0 Big 12) were never threatened as they extended their unbeaten streak over Oklahoma State (2-2, 0-1) to 36 games. Eric Crouch threw for a touchdown and ran for another and Correll Buckhalter ran for a pair of TDs for the Cornhuskers, who led 31-0 at halftime.

We looked better in the first half offensively than we had looked all year, and we did it against a good defense.

A Nebraska defensive unit that no team this season has been able to dent with any consistency looked almost human in the final 30 minutes.