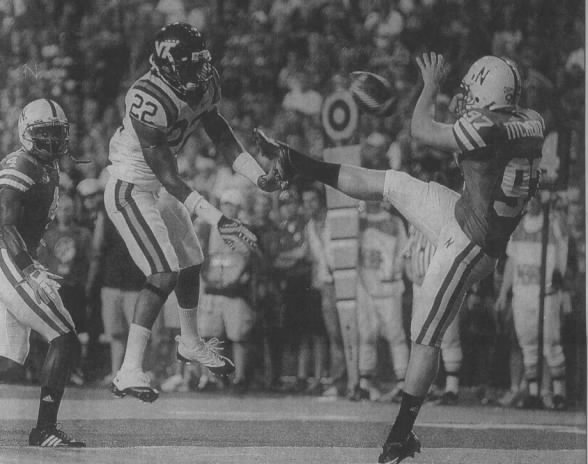 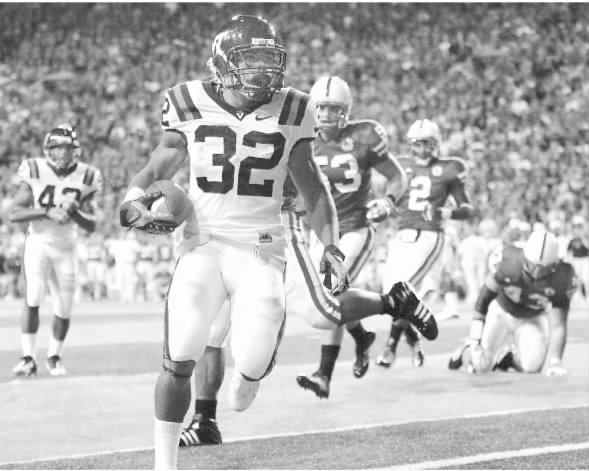 Darren Evans scores on a one-yard run in the first quarter to give Tech a 9-0 lead. · Fort Worth Star-Telegram · Newspapers.com

Virginia Tech scored on six straight possessions in the second and third quarters and held off a late Nebraska rally to hand the Huskers their first loss of the season, 35-30, in front of a record Memorial Stadium crowd.

Nebraska trailed 28-10 late in the third quarter but rallied to cut the deficit to 28-23 with more than seven minutes remaining. The Huskers (3-1) could get no closer, however, as a pair of costly penalties kept the decisive Virginia Tech drive alive, resulting in the Hokies’ final touchdown with 2:28 left to give VT a 35-23 lead.

Despite facing a two-touchdown deficit with less than 2:30 remaining, NU refused to fold. Quarterback Joe Ganz engineered a four-play, 80-yard touchdown drive that took just 56 seconds. The drive was capped by a 17-yard touchdown strike to Todd Peterson to pull the Huskers within 35-30 with 1:32 left.

Nebraska’s ensuing onside kick was secured by Virginia Tech at the NU 43. The Huskers had two timeouts left and were able to force a Hokie punt. Brent Bowden, who shanked a 21-yard punt and watched Nate Swift return a punt 88 yards for his first career return touchdown on his two previous punts in the fourth quarter, lofted a 30-yard punt to stick NU at the 10 with 25 seconds left.

With no timeouts remaining, Ganz again got Nebraska moving. He hit Niles Paul on a 21-yard pass, then found Peterson deep across the middle on a crossing route. Peterson hauled in the pass and crossed midfield but was stripped of the ball by VT cornerback Stephen Virgil at the Hokie 44, ending Nebraska’s hopes for victory.

Overall too many mistakes to beat a well-coached team that despite being young didn’t make mistakes.

There were some pleasant discoveries. There were a few disappointing ones.

Think back to last season, when Nebraska would get punched in the mouth and wilt into a corner. Not this time.

Perhaps the biggest disappointment is the lack of consistency of the Huskers’ offense in the first three quarters.

Nebraska has to figure out how to fix its defense in a hurry. Virginia Tech went 6-for-6 in the red zone and 7-for-17 on third downs.

There are some glaring statistics. ... Total yards rushing for the game by Nebraska - 55. Total yards by VA Tech after they already had nine points on the board - 14.

Bo Pelini’s late blowup may not have cost the Huskers the game, but he must learn to be smarter.