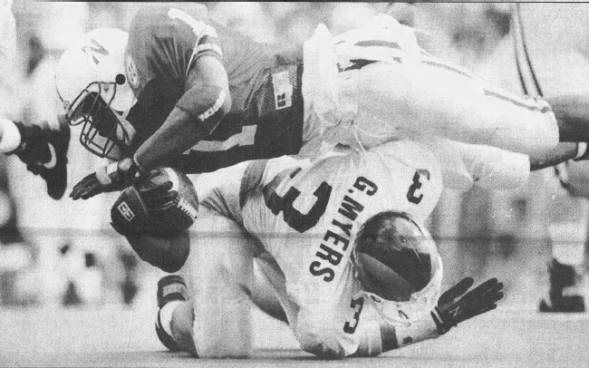 Nebraska turned on the offensive faucet and scored over 45 points for the third time in four games, defeating Colorado State, 48-13, in Lincoln.

Rover Toby Wright intercepted an Anthoney Hill pass on CSU’s second play from scrimmage and ran it in for a 34-yard touchdown. It was Wright’s second touchdown interception of the season.

The Rams kicked a field goal on their second possession, but Nebraska answered with an 11-play, 78-yard drive on which Lawrence Phillips accounted for 57 yards on seven carries.

NU took a 28-6 lead into intermission as quarterback Tommie Frazier scored on a 16-yard run and completed a 1-yard TD strike to tight end Gerald Armstrong. Frazier finished the day with 79 yards on 7-of-13 passing, including a 41-yard TD to Abdul Muhammad in the third quarter.

Nebraska rushed for 254 yards with 10 different ball carriers and saw eight receivers haul in passes. All-America candidate I-back Calvin Jones started the game but did not carry the ball in his one official play and watched the victory from the sidelines for the third consecutive game.

Outside linebacker Trev Alberts led the Husker defensive unit with 10 tackles, including one sack and three other tackles for losses. Alberts had five of NU’s season-high 24 quarterback hurries while Hill was sacked six times for 44 yards in losses.

• Blackshirts Take CSU by Horns
• What Others Said
• Tom Shatel: Viewing It From the Stands

• A Five-Score Win, but Still a Ways to Go for ’93 Huskers
IMAGE HERE