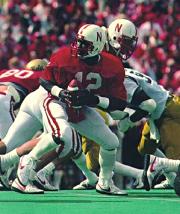 Top-ranked Nebraska received its biggest scare of the young season when winless UCLA took advantage of two Husker fumbles to put NU behind for the first time in 1983, 10-0 early in the second quarter.

The Huskers scored on their next two possessions, though, to take a 14-10 halftime lead. Then, when linebacker Mike Knox blitzed to sack Bruin quarterback Rick Neuheisel early in the second half, Neuheisel fumbled and Nebraska recovered at the UCLA 32.

The Huskers scored in seven plays and went on to win, 42-10. The win was the 100th in Coach Tom Osborne’s career, and came against the same school that he got win No. 1 against in 1973.