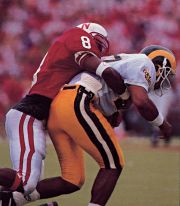 Nebraska took advantage of eight Colorado State turnovers to splatter the Rams, 71-14, and set up a showdown the following week against defending Pac-10 and Rose Bowl champion Washington.

The 13th-ranked (AP) Huskers scored on seven of their first nine possessions to jump to a 43-0 halftime lead over the defending Freedom Bowl champions. NU went on to roll up 696 yards in total offense, their seventh-highest count ever, and did not punt for the fourth time in history and the second game in a row.

Only one of the Huskers’ first-half touchdowns came on a drive longer than six plays, but NU still had 429 yards’ total-offense at halftime.

Senior quarterback Keithen McCant, who starred off the bench the previous week against Utah State, got the first start of his career and passed the test. He completed eight of his 13 passes for 99 yards and a 25-yard touchdown to tight end Johnny Mitchell, while rushing eight times for 68 yards and a 5-yard TD. In two games, he had guided the Huskers to scores on 11 of 14 possessions (nine touchdowns, two field goals).

The Rams, outweighed 58 pounds a man on the defensive line, tried to bother Nebraska by switching their defense from their normal 4-2-5 alignment to a 5-3 stack. “We had to audible some,” Husker Coach Tom Osborne said. “I thought Keithen checked off intelligently and did a good job.”

Colorado State, meanwhile, self-destructed on offense and defense. The 1-2 Rams’ eight turnovers equaled the record against Nebraska (last done by Kansas State in 1979); they did not make a first down until their fourth possessions; they gave up 30 gains of 10 yards or more; and they saw seven of their players helped off the field with injuries.

The Husker defense, criticized the previous week for giving up 421 yards and 28 points to Utah State, held the Rams to 296 total yards, and CSU’s two TDs both came against defenses featuring several second-teamers. The Blackshirts also got on the board themselves when strong safety Steve Carmer intercepted a Kevin Verdugo pass and returned it 34 yards for a TD that gave the Huskers a 57-7 lead with 6:54 left in the third quarter.

“I’m really proud of the defense,” Osborne said. “The first time we really let up was the start of the second half when we started substituting.”

Notes: The crowd of 76,379 marked the Huskers’ 177th consecutive home sellout since 1962 … 98 Huskers played … the win was NU’s 20th-straight at home vs. nonconference opponents … Nebraska started 2-0 for the sixth straight year.

Quote of the game: “I looked at (offensive tackle Brian) Boerboom toward the end of the third quarter and I told him, ‘We’re not going to be sitting here (on the bench) at this time next week.’ He just kind of nodded and smiled.” – Husker offensive tackle Erik Wiegert.