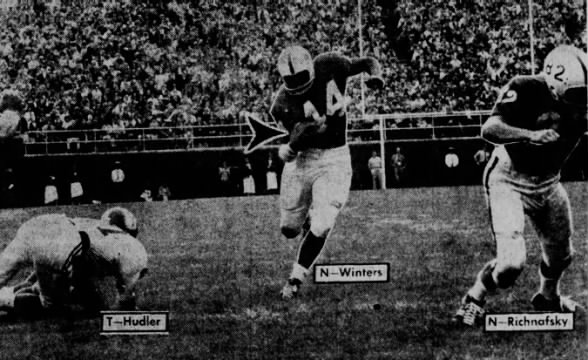 Nebraska’s Cornhuskers opened the 1966 season ranked No. 5 in the nation and received a strong challenge from Texas Christian before pulling out a 14-10 decision.

With a record crowd of 60,974 fans in the newly-bowled Memorial Stadium, the Huskers moved 63 yards to score the second time they got the ball – runs of 11 yards by Ron Kirkland and 17 yards by Harry Wilson, and a 13-yard Bob Churchich-to-Wilson pass paved the way for Charlie Winter’s 6-yard smash to put the Scarlets ahead, 7-0, with 4:53 gone in the first quarter.

But TCU struck back quickly after a Husker fumble at the NU 49, hitting two long passes (one on an interference call) to set up a two-yard TD toss and even the count at 7-7 midway in the second quarter.

Nebraska countered by following up the TCU tally with a 78-yard march, with the TD coming on a 10-yard Churchich-to-Dennis Morrison pass.

NU’s 14-7 halftime lead was slashed to 14-10 early in the third period when Bruce Alford kicked a 16-yard field goal. After that, the Huskers waged a gallant defensive battle to preserve the win.