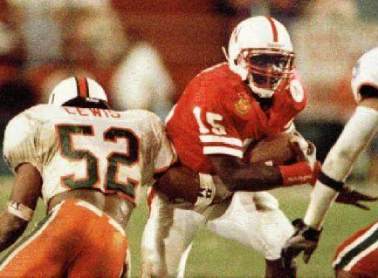 It was a night when Nebraska just wouldn’t give up, even in Miami’s home stadium, where the Hurricanes had won 62 of their last 63 games and had not lost at night since 1985.

Behind a pair of fourth-quarter touchdown runs by fullback Cory Schlesinger, No. 1 Nebraska defeated third-ranked Miami, 24-17, in the Orange Bowl in a spectacular come-from-behind victory to capture the Huskers’ first national title since 1971. The title was the first for Tom Osborne as head coach, whose teams fell just short in the 1982, 1984 and 1994 Orange Bowls.

After spotting the Hurricanes a 10-0 advantage at the end of the first quarter, the Huskers got on the board as quarterback Brook Berringer found Mark Gilman for a 19-yard touchdown to cap a five-play, 40-yard drive, cutting the UM lead to 10-7 at halftime. Miami extended the margin to 17-7 when Hurricane quarterback Frank Costa completed a 44-yard touchdown pass to Jonathan Harris just five plays into the third quarter.

On Miami’s next possession, the Husker defense turned the momentum of the contest as Dwayne Harris sacked Costa in the end zone to make the score 17-9. In the fourth quarter, Schlesinger capped a two-play, 40-yard drive with a 15-yard run to pull NU within 17-15. Quarterback Tommie Frazier, who entered the game on the previous series, found Eric Alford in the end zone for the two-point conversion to tie the score.

After forcing a three-and-out on Miami’s next possession, Nebraska marched 58 yards on six plays before Schlesinger’s 14-yard score gave the Huskers a 24-17 lead. Kareem Moss ended any Hurricane comeback hopes with an interception. Frazier ran out the clock, giving the Huskers their third national title in school history. 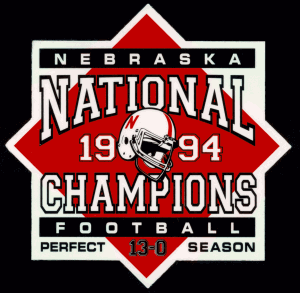 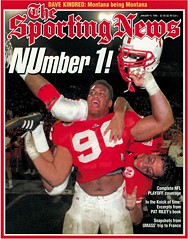 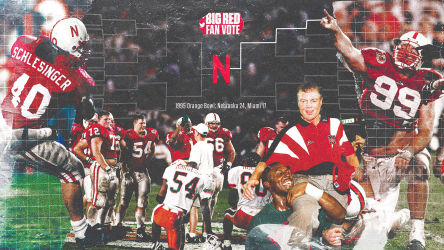 When the game was there to be won or lost, Osborne quit chewing his gum so nervously, folded his arms, bit his lip and called for the option.

While Sapp had his moments, it was clear on NU’s two late scoring drives that Stai’s pounding had taken its toll.

Osborne’s commitment to the option, and junior quarterback Tommie Frazier, was vindicated during the game’s final 8 minutes.

Tommie Frazier ... did what the Hurricanes insisted he couldn’t do: He ran the option and by doing so engineered the comeback that Nebraskans will be talking about for harvests to come.

Miami had 4 total yards on its last five possessions. Nebraska had two title-shaking touchdowns. That was the game.

Osborne is a son of Nebraska. He was always a gentleman when he lost the big bowl game. You couldn’t tell the difference when he finally won it.

The Orange Bowl was not particularly well played. But you can bet the red-and-white clad Nebraskans don’t care.

At this point Tommie Frazier has to be the greatest Cinderella story, well, since Cinderella.