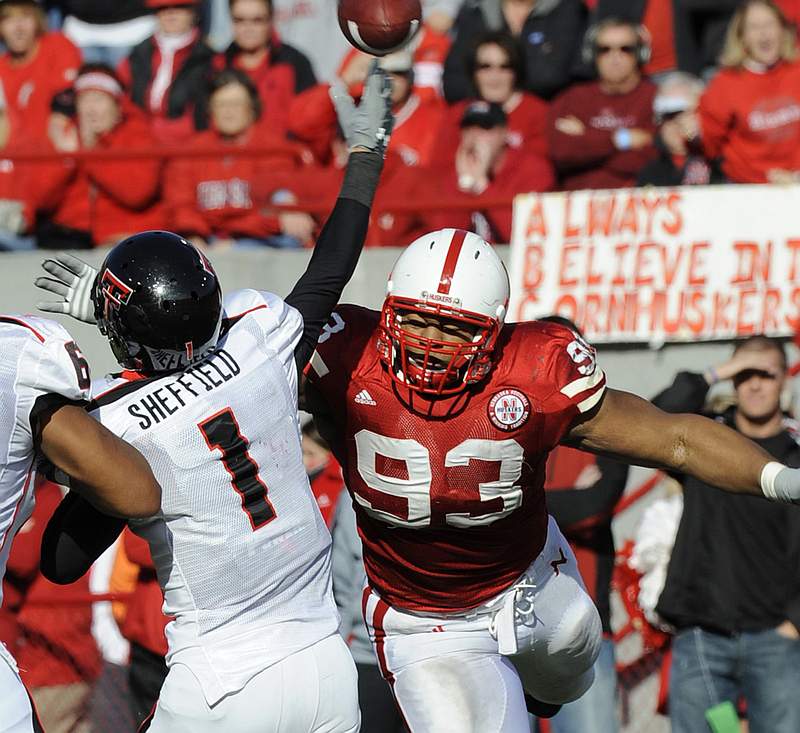 Steven Sheffield gets a pass away under pressure from Ndamukong Suh. (Dennis Hubbard photo)

No. 15 Nebraska outgained a potent Texas Tech offense, but two long scoring drives and an 82-yard fumble return for a touchdown were enough to give the Red Raiders a 31-10 win.

The Huskers penetrated the Red Raider red zone three times in the first three quarters without scoring points. One of the red zone stops came when Daniel Howard scooped up a fumble by Niles Paul on a backward lateral from quarterback Zac Lee and raced 82 yards for a touchdown with 4:52 left in the first quarter.

That play provided the winning score for the Red Raiders, who began the game with a nine-play, 80-yard scoring drive.

The Huskers went into halftime trailing 24-3, then dominated the third quarter, but NU was unable to put points on the scoreboard. Nebraska outgained Tech 72-(-3) in the third period.

Nebraska finally found the end zone with 8:03 left in the game, cutting Tech’s lead to 24-10 when Cody Green hit Khiry Cooper on a 13-yard touchdown pass to cap a seven-play, 40-yard drive.

On its ensuing possession, Texas Tech marched 54 yards in nine plays to put the game away.

Holding Tech to less than 300 yards and 24 offensive points should have been good enough to win the game.

This is not the time to panic or overreact. But it is the time for smart, tough and swift decisions by the head coach.

Green is the future.

NU better have this figured out by Nov. 7, or the stretch run of the season could be a long, troubling slog.

If an ‘Offensive Playmakers Wanted’ sign wasn't ordered somewhere in Lincoln before Saturday, it should be in production by the time you read this.

Pelini must make dramatic philosophical or personnel changes before next season.

Let’s see what the kid has to offer as a starter, before it’s too late.

Pelini kept saying this is a work in progress. Now we know for sure that he’s not kidding.