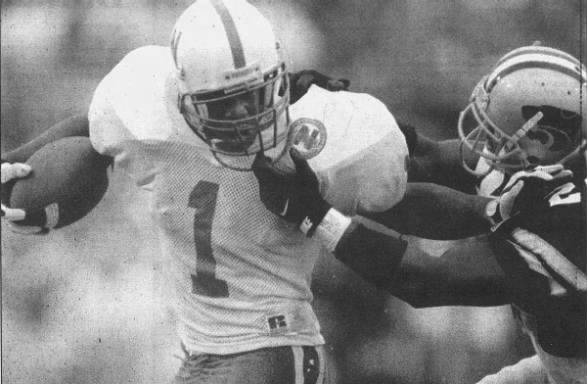 A menacing defense and a grind-it-out offense got the Huskers their seventh win of the season in a 17-6 decision on the road against nationally ranked Kansas State.

NU scored on its second possession of the game as Lawrence Phillips had six straight carries for the entire 28 yards of the drive. KSU answered in the second quarter with a 29-yard pass from Chad May to Mitch Running, but Nebraska’s Troy Dumas blocked the extra-point kick to preserve a 7-6 Husker lead.

Berringer came in for the Huskers’ last drive of the first half wearing a specially made flak jacket and played the second half, but was limited to drop-back passes, no audibles or options, and handing off to Phillips.

Neither team scored in the third period, but NU had an 11-play drive in the fourth culminated by a Jeff Makovicka 15-yard run. Nebraska then had a 12-play drive that ended with a 24-yard field goal by Darin Erstad for the final 17-6 margin.

READ MOREHIDE
Despite a badly sprained thumb, Phillips was the game’s leading rusher with 117 yards on 31 carries.

There were no surprises against the Wildcats, as 40 of the 61 offensive plays went between the tackles. The Huskers threw just 11 times and rushed for just 210 yards, but the Blackshirts held the Wildcats to a season-low minus-seven yards rushing. May passed for 249 yards but was sacked six times.

Nebraska took this fork in the road and stuck it in Kansas State.

The Cornhuskers might have a national championship-caliber defense. ... Reports of their demise have been greatly exaggerated.

Nebraska can't stop the pass. K-State always wins at home. Nebraska can't throw. And K-State had its best team ever. What about those things? All lies.

It was downright ugly at times. But that's what a game turns into when both defenses dominate. And believe me, both defenses did their jobs well ... very well.