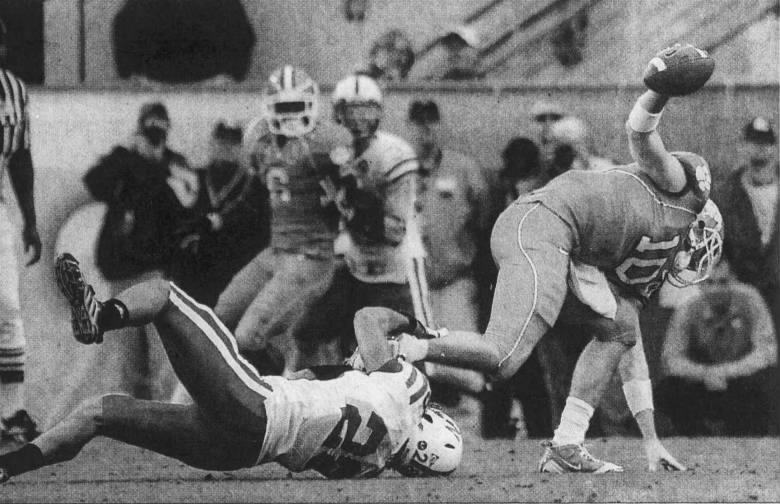 Eric Hagg sacks Clemson’s Cullen Harper for a 16-yard loss near the end of the game. · Lincoln Journal Star · Newspapers.com

Nebraska scored on four consecutive third-quarter possessions to rally from an 11-point halftime deficit and the Blackshirts capped a dominating effort with a late defensive stand as the Huskers came back for a 26-21 victory over Clemson in the Gator Bowl.

The Huskers were poised for the comeback thanks to an outstanding effort from the Blackshirts. Nebraska held Clemson to 210 yards, including only four yards rushing. All 21 Clemson points came off Husker turnovers, while NU forced two Tiger turnovers that led to six important points in the five-point win.

Clemson led 14-3 at halftime thanks to a pair of touchdowns off Husker turnovers. The Nebraska offense then erupted for 20 points in the third quarter, gaining a lead the Huskers would not relinquish with 1:40 remaining in the third quarter. Overall, Nebraska scored the game’s final 16 points thanks to clutch plays from Joe Ganz, Quentin Castille and the offense, and a stout effort from the defense.

After the Tigers converted another turnover into a touchdown to go on top 21-10, the Blackshirts limited five straight Clemson drives to three or fewer plays. The Tigers ran 14 plays during that stretch for minus-six total yards. During the same period, Ganz threw a touchdown pass to Todd Peterson while Alex Henery connected on three field goals to provide the final margin of victory.

Clemson made one final drive in the closing minutes, marching from its own 23 all the way to the NU 10. With a 1st-and-goal opportunity, the Tigers were sacked for a loss of 16 yards and threw three incompletions to seal the victory.

The game cannot be considered an artistic success. But for the second game in a row the team displayed great heart and determination.

May the team with the best chemistry win. Call me corny, but maybe that was the difference in Nebraska’s 26-21 triumph.

The old hard-hitting nature of the Big Red was back on New Year’s Day, and it’s hard to believe it will be going away anytime soon.

Our defense won the game for us and Joe came through when he needed to.