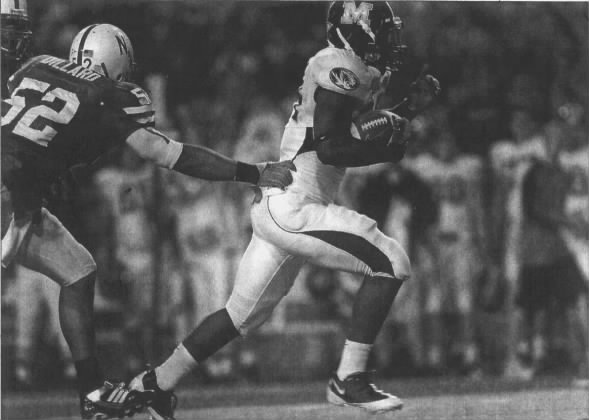 Missouri’s high-powered offense operated with machine-like precision as the No. 4 Tigers ended a 30-year losing streak in Lincoln with a 52-17 victory over Nebraska on Homecoming at Memorial Stadium.

The Huskers watched Heisman Trophy hopeful Chase Daniel lead Missouri on scoring drives on eight of its first nine possessions in the opening three quarters to take a commanding 52-10 lead. The only drive in which the Tigers did not score with Daniel on the field came on their final possession of the first half when they attempted a 59-yard field goal as time expired after starting the drive with 16 seconds remaining in the half.

Daniel directed an MU attack that amassed 412 total yards in the first three quarters, including 253 passing yards and 159 rushing yards.

Sophomore tailback Derrick Washington carried the rushing load for the Tigers by rolling up 139 yards and two touchdowns on just 14 carries in the first three quarters while adding a receiving touchdown as well. For the game, MU finished with 462 total yards, including 261 passing and 201 on the ground.

Now we’ll see if the new superstructure that Pelini is building can withstand the catastrophic storm that just blew through Lincoln.

What is this offense’s identity? Does it have one?

The margin on the scoreboard reflected the apparent distance between the programs. The gap is wide, folks.

Had this been a baseball game, the Tigers would still be at bat. And for that reason alone, Husker fans should be thankful.

Nebraska tried to throw Daniel a spin with a three-man front. It took Daniel three plays to get the Tigers into the Huskers’ end zone.

Let’s hope the team and coaching staff puts this all behind them and moves on.