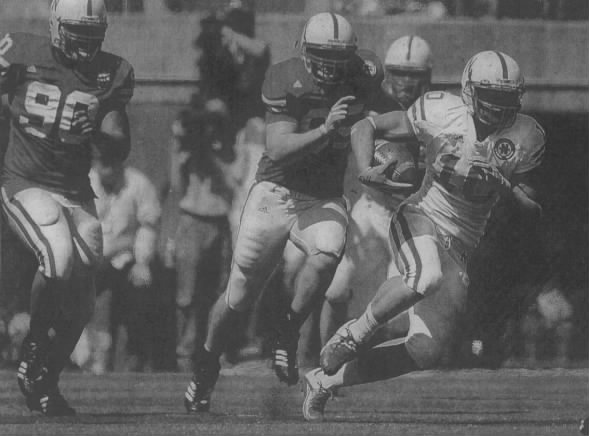 Roy Helu Jr. is chased by Terrence Moore (90) and Faron Klingelhoefer during the second half. · Lincoln Journal Star · Newspapers.com 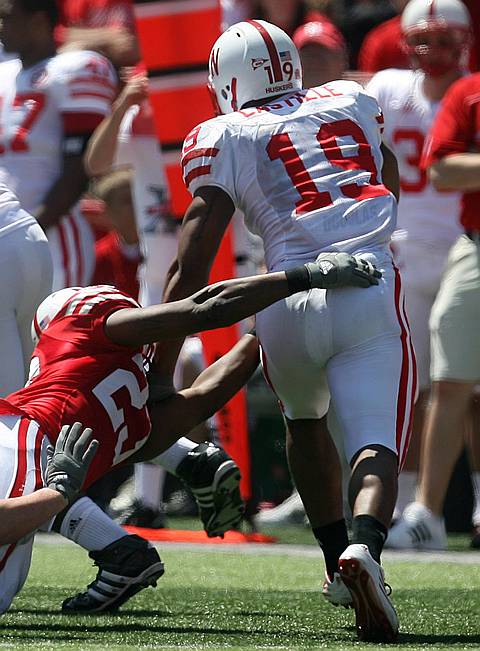 A Nebraska Spring Game record crowd of more than 80,000 watched Joe Ganz and the Husker Reds jump out to a 21-0 lead early in the second quarter on their way to a 24-14 win over the Whites in Bo Pelini’s head coaching debut at Memorial Stadium on Saturday.

Nebraska’s returning starter at quarterback from the end of the 2007 season, Ganz completed four passes for 131 yards and two touchdowns to power the Reds, while Marlon Lucky added 37 yards and a touchdown on the ground in limited action. The Reds amassed 311 yards of total offense in just 55 plays in a game that lasted just two hours and 19 minutes because of a running second-half clock.

While the Red offense performed well, Pelini’s defense supplied the first highlight on the game’s opening play from scrimmage. Linebacker Tyler Wortman broke through the White offensive line and hit quarterback Patrick Witt as he attempted to pitch the ball to I-back Roy Helu. Wortman hustled after the loose ball and recovered it at the White 7-yard line to set up the Reds’ opening score.

Three plays later, Lucky plunged in from one yard out to give the Reds a 7-0 lead less than two minutes into the game. After the Reds held on the next drive, Ganz and wide receiver Curenski Gilleylen provided the game’s longest play with a 77-yard scoring strike to put the Reds up 14-0 with 9:06 left in the opening quarter.

Nebraska fans’ collective passion might have waned in some quarters in recent years. But you saw passion in full bloom Saturday.

This was about Nebraska fans ... turning out to show their support and give a hurting program a collective hug.

Sophomores Roy Helu Jr. and Quentin Castille both looked impressive at times behind an offensive line that showed promise of becoming a solid unit.