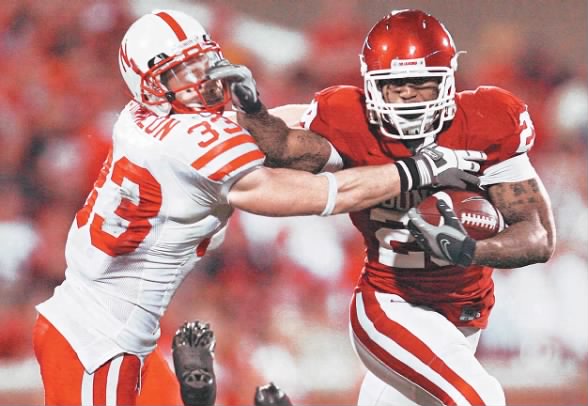 Capitalizing on early Nebraska mistakes, Oklahoma rolled to a 35-0 first-quarter lead en route to a 62-28 whipping of the Huskers in Norman.

It was the most points ever scored by a Nebraska opponent in the first 15 minutes, and 28 of the 35 points came in a nightmarish three-minute span for the Huskers.

The Sooners jumped to a 7-0 lead just 2:43 into the game by capping the game’s opening drive with a two-yard touchdown run by Chris Brown.

That was just the start of the Sooner onslaught. On Nebraska’s first play from scrimmage, OU’s Dominique Brown intercepted a Joe Ganz pass and sprinted 18 yards to paydirt to push Oklahoma’s lead to 14-0.

The Huskers’ second possession lasted just two plays as tight end Dreu Young fumbled. The Sooners responded with a 48-yard touchdown pass from Sam Bradford to Quentin Chaney to put Oklahoma up 21-0 less than five minutes into the game.

On the second play of NU’s ensuing possession, Ganz was intercepted again, this time by OU’s Lendy Holmes, who returned it 26 yards to the Nebraska 9. The Sooners cashed in on the next play with Jermaine Greshman’s touchdown reception. With 9:27 left in the opening quarter, OU had a 28-0 lead, while Nebraska had run just five plays — three of them turnovers.

Despite the savage first-half beating they absorbed, the Huskers gave their fans a few hopeful indicators to pick out of the wreckage.

What can you say about this one? Nothing. Forget it. Crumple it up and leave it on Lindsey Street. Head back north and don’t look back.

What Nebraska saw for the first time live was that it was no fluke Bradford finished his freshman season last year ranked No. 2 in nationally in passing efficiency

To Pelini’s credit, he stayed Saturday night until all the questions were asked.

That was the most painful five minutes of watching Nebraska football since I became a fan in 1962.