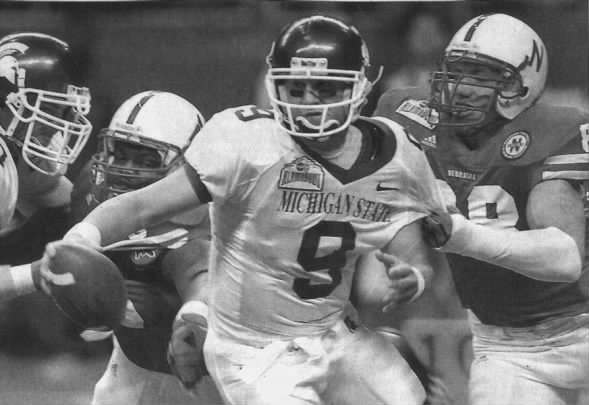 Behind a stifling defensive performance and a record-setting day by sophomore I-back Cory Ross, Nebraska picked up its 10th victory of the year with a 17-3 victory over Michigan State in the Alamo Bowl under interim head coach Bo Pelini.

The Husker Blackshirts recorded five sacks and intercepted three passes in holding the Spartans to three points, equaling the lowest point total by a Husker opponent in 42 bowl games.

On offense, Ross rushed for a career-high 138 yards and two touchdowns on a school-record 37 carries and scored on touchdown runs of 2 and 6 yards as NU built a 14-point halftime lead. Offensive MVP Jammal Lord was solid through the air, completing 8 of 17 passes for 160 yards.

With the score tied 3-3 in the opening minute of the second quarter, Nebraska’s Daniel Bullocks intercepted a Jeff Smoker pass and returned it to the NU 35-yard line. Lord found Isaiah Fluellen for a 58-yard pass deep into MSU territory, and Ross scored two plays later to give the Huskers the lead for good.

Whatever happens, it was a great reflection on both Frank and Bo that the team played well for them.

Yes, it was a workmanlike job against an unranked Michigan State team. But there were many signs ... that Monday night’s combination might be a winner.

Coach John L. Smith reportedly told his charges at halftime to shut up and play football. They kept talking. The football didn’t go so well.

It was one last snapshot of the way things used to be. You might want to put that one in the scrapbook.

In the end, what’s left are some bittersweet scenes from San Antonio.

Monday’s win did little to shake out any non-believers in the Church of Bo.

Michigan State talked smack. And in the end — as usual — got smacked.