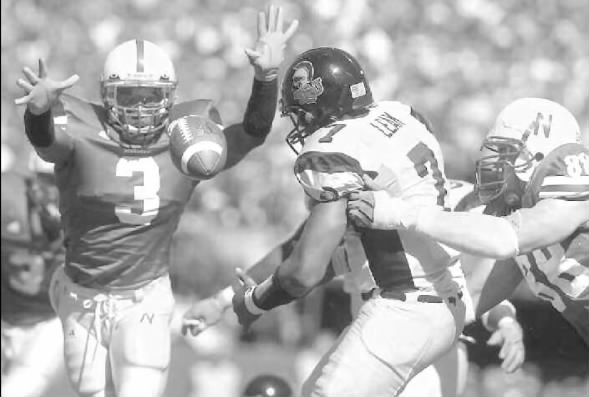 Trevor Johnson forces a fumble by Troy State quarterback Aaron Leak, and Fabian Washington gets set to snag the ball and set up Nebraska’s first touchdown. · The Daily Oklahoman · Newspapers.com 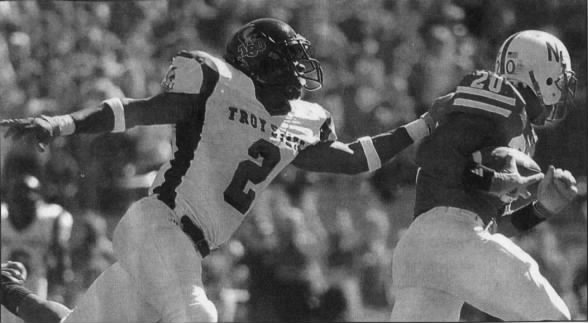 Huskers shut out Trojans for fifth win of ’03

The nation’s top-ranked defense controlled the game from start to finish as Nebraska posted its first shutout in three seasons with a 30-0 victory over Troy State.

Nebraska opened the scoring late in the first quarter with David Dyches’ 10th field goal of the season, from 40 yards out. In the second quarter, after Fabian Washington recovered a fumble at the TSU 21, Jammal Lord scored on a 1-yard run to give the Huskers a 10-0 lead they carried into halftime.

Nebraska committed a pair of turnovers on its first three drives of the second half but then got its offense untracked. Lord hit tight end Matt Herian with a 77-yard pass to the Troy State 3, and I-back Cory Ross scored one play later for a 17-0 lead. On their next possession, Nebraska marched 49 yards in six plays, with Lord finishing the drive with a six-yard TD run.

Nebraska capped the scoring with a drive led by No. 2 quarterback Joe Dailey, who hit Herian on a 21-yard TD strike to account for the final margin. 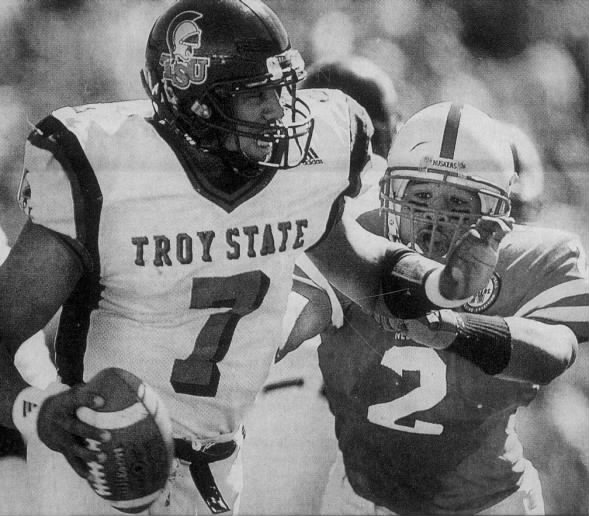 Same song, fifth verse. Great defense, excellent punting and inconsistent offense. But as we have said, this is a winning formula.

Those of you wondering if the Huskers can keep winning this way, relax. Really, what choice do they have? They are what they are.

This Husker team isn’t going to blow people out like in the past. The Huskers are committed to playing a different kind of offense.

Lord has been pretty erratic. ... But just when you think you’ve had enough, Lord does something to restore the faith.

This team has flaws you learn to live with. It’s not exceptionally talented on the offensive side of the ball, nor particularly deep.

Thanks and praise must go to NU’s staunch D-line.