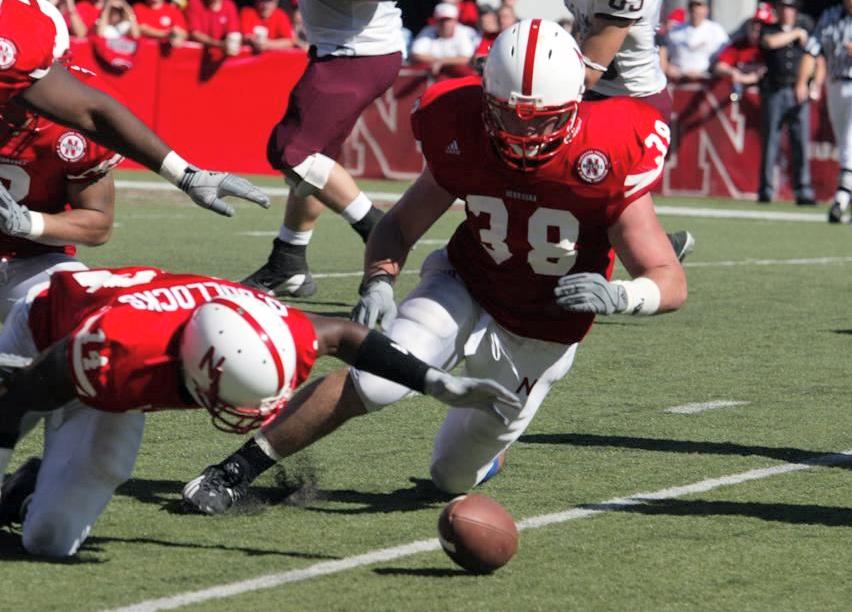 Daniel Bullocks reaches to recover the ball after forcing a fumble by Derek Farmer at the Nebraska 10 late in the third quarter. | Courtesy of Nebraska Athletics

The Nebraska Blackshirts were back to their ball-hawking ways, forcing a school record-tying eight Texas A&M turnovers that led to 35 points in the Huskers’ 48-12 win over Texas A&M.

After Texas A&M got on the board with a first-quarter field goal, Nebraska erupted for 34 unanswered points, sparked by a defense that put the clamps down on an Aggie offense that had rolled for 739 total offense yards in a 73-10 win over Baylor the previous week. The Blackshirts limited the Aggies to 244 total yards.

Nebraska’s offense got rolling on its second possession, marching 51 yards in seven plays capped by a 22-yard touchdown run by Jammal Lord to give Nebraska a 6-3 lead.

The Blackshirts then set the tone for the rest of the day. Sophomore free safety Josh Bullocks pulled down his school record-tying seventh interception of the season on Texas A&M’s first play of the ensuing drive to set Nebraska up at the A&M 33-yard line.

It was Bullocks’ fourth consecutive game with an interception and tied Nebraska’s season record with Bill Kosch (1970), Dana Stephenson (1969) and Larry Wachholtz (1966).

I would love to see what Joe, Horne and Kriewald could produce with 70 snaps together.

People say Frank Solich will need a quarterback with game experience going into next season. The thing Solich needs the most right now is next season.

Nebraska proved Saturday that it is tough enough to get off the floor and thump a worthy opponent, just a week after being whipped to the point of embarrassment.

It’s probably worth our while to enjoy each victory as they come rather than worrying about what may happen if and when there’s a Day of Reckoning some day in the future.

Adams’ touchdown was a major highlight in a game which lost a lot of interest in a hurry.