Huskers hold on, pull off upset in Iowa City

Nebraska jumped ahead early and survived a tense fourth quarter for a 24-17 upset win in Iowa City to thwart the Hawkeyes’ plans for clinching a spot in the Big Ten championship game.

Nebraska quarterback Casey Thompson connected with Trey Palmer on an 87-yard touchdown pass in the first quarter for a 7-0 lead, and the two hooked up again in the second period to make it 17-0 at halftime. The teams traded third-quarter touchdowns, Nebraska’s coming on a 14-yard pass from Thompson to Marcus Washington that made it a 24-0 game.

The Huskers benefited from Iowa miscues, one of them a fumble when quarterback Spencer Petras was sacked in the first quarter on a play that knocked him out of the game.

Palmer broke Nebraska’s single-season record for receiving yards, finishing with 165 for the game and 1,043 for the season. Thompson threw for 278 yards and finished with a passing efficiency rating of 177.51 against an Iowa defense that entered the game No. 4 nationally in that department at 103.10. 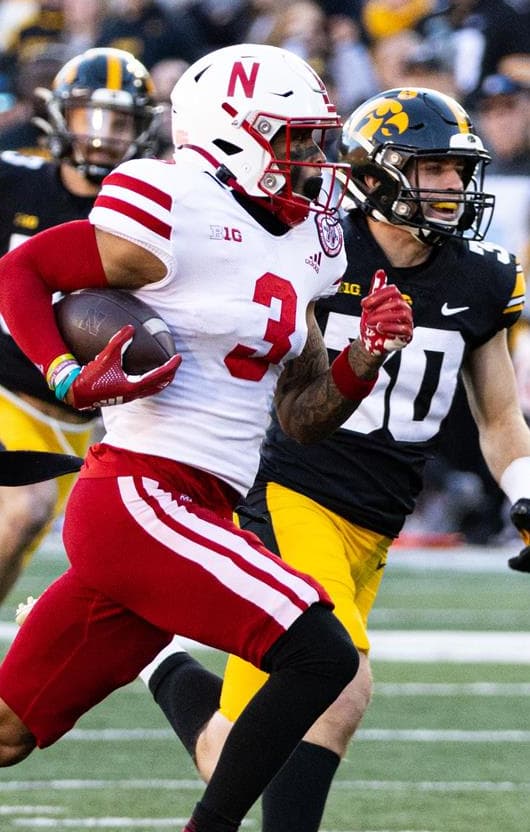 Trey Palmer scored two of Nebraska’s touchdowns and earned a spot in the Husker record book. | Photo courtesy of Huskers.com

This was a win for Mickey Joseph, whose most notable accomplishment during his nine-game run as interim head coach was to keep the team motivated and focused.

Go ahead and let yourself enjoy it. Nobody’s coming from behind to take that away.

It had been so long since Nebraska had last won a Big Ten Trophy game, most of NU’s players and coaches didn’t know what to do.

Joseph kept this team confident, even through all the losing. Nebraska fans will long remember him for that.

The big lead, against a team that hadn’t come back from more than three points down all season, nearly didn’t hold because nothing with this Nebraska program has been easy of late.

A door closed on one era of Husker football on Friday. Another may open as soon as Saturday. Yes, please.

Perhaps the way Iowa lost here at Kinnick to the Huskers will be a defining reminder that his offense, the worst in the country among Power Five teams, needs to change.

Nebraska’s season ended not with a whimper, but with a raucous victory in Iowa City. ... With all things considered, Nebraska could have been a lot worse than 4-8 this season.

Nebraska improved on last year’s unseemly 0-8 record in one-score games to 2-5 this season. Maybe they can draw even next year.

Against the nation’s No. 108 defense, Iowa’s No. 130 offense scored 17 points. That’s the number it has averaged this season, and that’s a number that is no good.

So much about Friday felt as if things had come full circle.