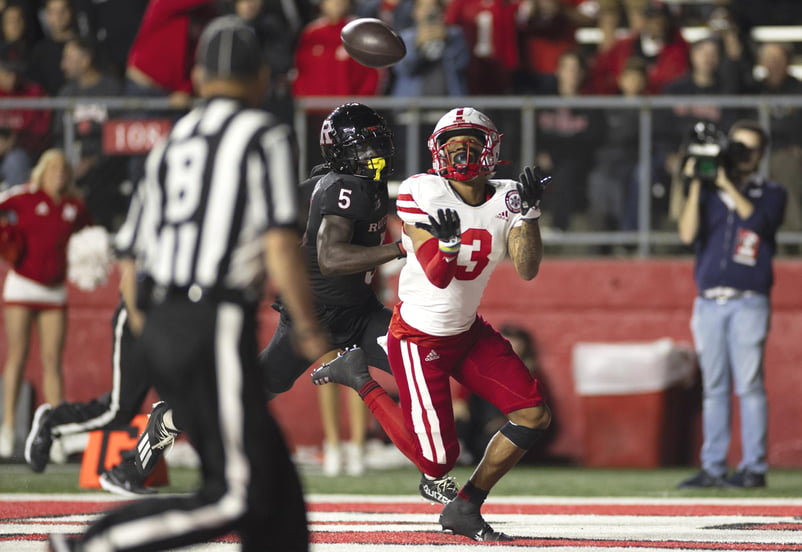 Trey Palmer eyes the ball before gathering it in for the game-winning touchdown in the fourth quarter. | Scott Bruhn/Nebraska Communications

Down 13-0 and looking punchless on offense for the first 30 minutes, the Huskers turned things around in the second half for a 14-13 win over Rutgers in Piscataway.

The Husker defense surrendered a touchdown drive on Rutgers’ first possession but then kept the Scarlet Knights out of the end zone for the remaining 57 minutes of the game.

Rutgers had one last chance to win after taking over at its own 20 with 1:03 left. The Scarlet Knights appeared to have a first down on a pass interference penalty, but a replay review determined that the Huskers’ Ochaun Mathis had tipped the ball at the line of scrimmage, nullifying the flag. On the next play, Husker freshman Malcolm Hartzog intercepted Evan Simon’s third-and-10 pass with 48 seconds left to clinch the win for the Huskers. 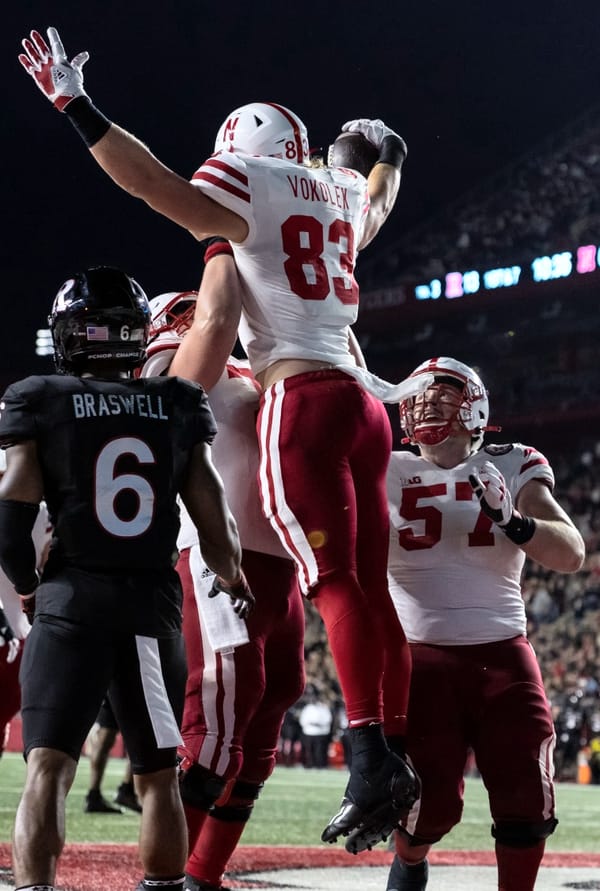 The ordeal was well worth it if Joseph can successfully continue the process of removing self-doubt from the Huskers.

Suddenly, five of the remaining six games look gettable. That’s not something that seemed possible a month ago.

Give that defensive staff their due. They adjusted. They had a group that kept their poise. They kept this team’s head above water when it looked pretty dang bleak.

Where late-Frost-era teams would fold in the fourth quarter, Mickey’s team has hardened and met the moment.

This was a bad loss, to a bad team, with as bad an end-game sequence as we’ve seen in Piscataway in long time.

Nobody should ever question the toughness of Thompson. He stood in the pocket and took hit after hit.

‘Fake first place’ may indeed be fake, but, over the last two games at least, it’s as good as it gets.

Instead of letting up and giving up, Nebraska dug deep and believed they could do it.

Say this about the interim coach: He’s got his finger on the pulse of the Huskers.

This second half was screaming for a steady diet of Sam Brown runs and Vedral game management. ... Instead they had Simon winging it. Nebraska cashed in.