Huskers halt Hoosiers in second half

Casey Thompson’s bomb to Trey Palmer broke a 21-21 tie in the fourth quarter, and the Huskers went on to beat Indiana, 35-21. Palmer finished with 157 receiving yards, and Anthony Grant had 136 yards rushing.

The Hoosiers scored two touchdowns late in the first half and had the momentum heading into intermission. But the Nebraska defense, which had struggled throughout the first four games of the season, shut out Indiana in the second half and held the Hoosiers to under 300 yards of total offense on the night. 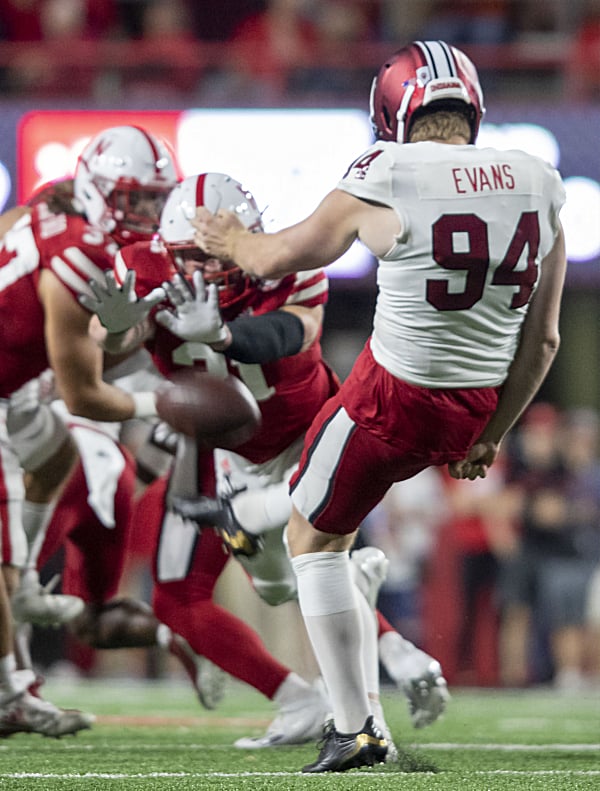 Chris Kolarevic blocks an Indiana punt. Malcolm Hartzog scooped up the ball and scored for the Huskers. | Kenny Larabee, KLIN

Joseph and his team needed something to build on, and winning a game that was tied in the fourth quarter is a good starting point.

Worry about style points another day. Set aside the expectations you have for this program for a few days.

Palmer and Grant, they were dudes when the dudes were needed.

On a Big Ten slog on a Saturday night, beauty was in the effort. And the emotion.

Tell me you anticipated Nebraska shutting out Indiana in the second half.

For a good while, it did not look like a football game. Whatever you want to call it, Nebraska won, and Indiana did not.

The score reflected on the video boards — Nebraska 35, Indiana 21 — ignited bliss, euphoria, happiness. It was instant catharsis that came not a moment too soon.