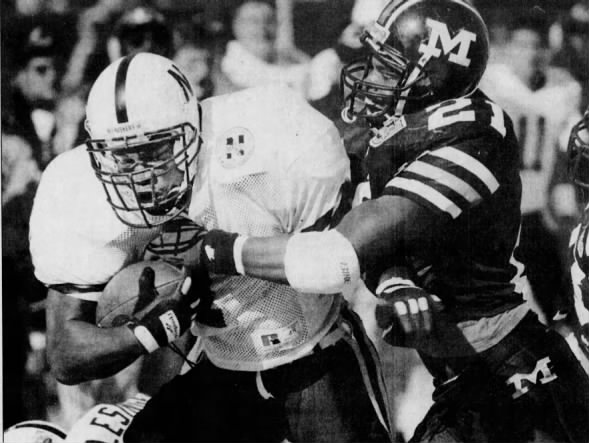 Lawrence Phillips is stopped by Missouri’s Andre White after an 11-yard gain in the third quarter. · St. Louis Post-Dispatch · Newspapers.com

Slow start, but Tigers tamed; Buffs up next

It was the fourth consecutive week without Tommie Frazier as the Huskers won their third conference game and improved to 8-0 with a 42-7 win at Missouri.

The Huskers were held scoreless in the first quarter but quickly rectified the matter, scoring 14 points in each of the last three periods. Missouri didn’t score until 7:36 remained in the game, against Husker reserves.

The NU offense totaled 482 yards to Missouri’s 198 and outrushed the Tigers 330 to 48. Lawrence Phillips led all rushers with 110 yards and tied Bobby Reynolds’ school record of eight straight 100-yard rushing days to open a season. Meanwhile, Brook Berringer completed 9 of 13 passes for 152 yards and three TDs.

The offense was still limited as NU coaches protected Berringer from unnecessary hits. The defense once again made up for those limitations as it held an opponent to under 50 yards rushing for the fourth straight game.

Linebacker Ed Stewart had eight tackles, four quarterback hurries, a sack, a pass breakup and a fumble recovery. Barron Miles picked off his fourth interception, returning it 27 yards, and also had five tackles and a forced fumble.

It was the fifth time the 1994 Huskers scored 42 or more points and the seventh time they rushed for more than 300 yards.

Let's see Colorado's Rashaan Salaam without a passing threat or an option game. Air who? Hand Phillips the Heisman.

With a confident Berringer at quarterback, the Cornhusker offense is about as diverse as Colorado's.