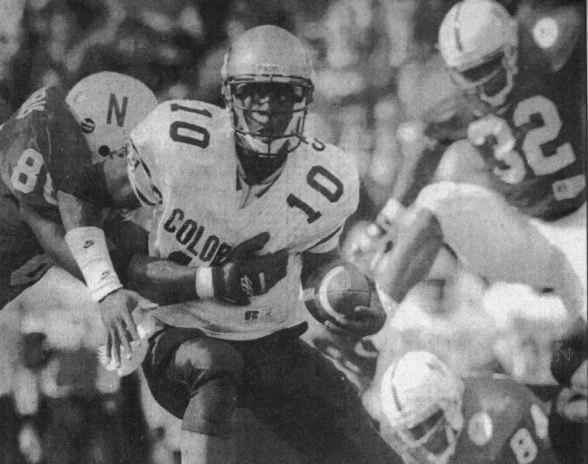 Dwayne Harris wraps up Kordell Stewart for a loss in the second quarter. The Huskers once again proved to be Kordell’s Kryptonite. · Staunton News Leader · Newspapers.com

Nebraska took control of the Big Eight race and took a major step toward a run at the national title with a resounding 24-7 win over Colorado in a matchup of top-3 teams in Memorial Stadium’s 200th consecutive sellout.

Many critics didn’t give the Huskers much of a chance against the potent Buffaloes without quarterback Tommie Frazier, but Brook Berringer showed that the Huskers and Tom Osborne sport more than a running, one-dimensional offense, while the Husker Blackshirts dominated.

Nebraska scored on its first possession on a 14-yard run by fullback Cory Schlesinger. NU added a 24-yard field goal by Tom Sieler six minutes into the second quarter, then took a 17-0 lead on a 2-yard run by Clinton Childs with 36 seconds left in the first half. At that point, NU had 234 yards to CU’s 89, Berringer had completed 9 of 12 passes for 100 yards, and CU’s Kordell Stewart had completed 2 of 6 passes for 7 yards.

In the second half, Nebraska scored on a 30-yard pass from Berringer to tight end Eric Alford to go up 24-0 before the Buffs scored with 1:06 remaining in the third.

In the end, the Blackshirts held CU to 314 total yards and did not allow the Buffs to convert a third or fourth down all game. Entering the contest, Colorado ranked No. 2, No. 4 and No. 4 nationally in rushing, total and scoring offense, respectively.

Nebraska controlled the clock with a season-high 38:24 of possession time. The win extended Nebraska’s streak of nine-win seasons to 26 and was the Huskers’ fourth victory of the season over a ranked opponent. 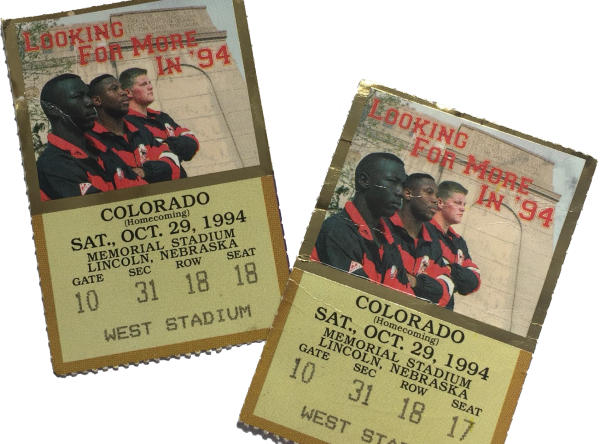 So thorough was the defeat that you could have given the Buffaloes a fifth . . . sixth . . . even seventh down, as well as a rosary full of Hail Marys, and it wouldn’t have mattered.

Some of us presumed Osborne's pursuit of an elusive national championship was shot before the real chase began. Some of us were wrong.

The Huskers are No. 1 because of an offensive line that seems bent on destroying any and all moving objects in its path, including Hurricanes.

For one day, at least, the injustices were righted in Lincoln.

Nebraska may not have a high-tech offense, but the Huskers showed they can sledge-hammer teams with the best of them.

The team nobody loves looks like it's headed for another January engagement in the Orange Bowl, and, unfortunately, it is bringing along that caveman offense.

Bill McCartney was served up a nasty helping of Nebraska breakfast yesterday. It included plenty of pancakes by the Huskers offensive line, lots of juice from the arm of quarterback Brook Berringer and a special order of Kordell Stewart, over medium.

If an offensive line can carry a football team to the mythical national championship — and I'm not so sure it can't — then hand the trophy to Nebraska.

Both the Cornhuskers and the Buffs came out with tight ends yesterday morning. Nebraska's tight ends were physically exceptional, Colorado's a mental abnormality.

Without a national playoff system, style points mean everything. Saturday, the boring team from the heartland couldn't have played with more style.

Don't start backpedaling now, claiming the Buffaloes weren't really that good. They were. They just weren't a match for Nebraska.