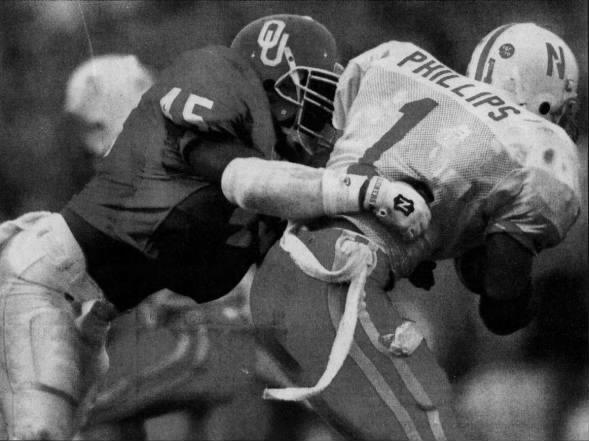 No. 1 Nebraska remained undefeated, clinched the Big Eight title outright and earned an Orange Bowl berth to play for a national championship against Miami with a 13-3 win over the Sooners.

Nebraska held OU to 179 total yards, including just 47 after halftime and minus-5 yards in the fourth quarter.

The Huskers struggled to get their offense moving in the first half but took a 3-0 lead when Darin Erstad hit a 46-yard field goal early in the second quarter.

Oklahoma tied it up with 2:19 left in the half when Scott Blanton hit a 25-yard field goal. An earlier try by Blanton was blocked by Barron Miles, his fourth blocked kick of the season.

The second half was all Nebraska. The offense scored on its first drive, an 11-play, 76-yard drive that ended with a 26-yard field goal by Tom Sieler.

On OU’s second drive of the third quarter, the Sooners gained a total of 14 yards before punting. Never again did Oklahoma produce a play with positive yardage as the Sooners punted three times, threw six incomplete passes, were sacked once, and were intercepted once by Miles.

Miles also had three pass breakups to tie the career school record of 19.

Nebraska’s offense, meanwhile, picked up 239 of its 302 total yards in the second half.

Berringer lacked the sharpness and the play-making ability of his first six starts. And one could only speculate that there was a direct correlation to seeing Frazier in the on-deck circle.

The sobering truth is that Nebraska simply does not have the kind of blocking and running weapons usually seen on national championship teams or most Osborne teams.

Nebraska's offensive line, normally dominant, had its hands full with an inspired Oklahoma defense that was playing its last game under Coach Gary Gibbs.

What's going on here? Didn't Nebraska-Oklahoma used to be higher than an elephant's eye? Didn't it take up so much room that it needed its own solitary date?

Frazier's presence, and availability, on Friday put Berringer under a scrutiny he hadn't experienced since leading the Cornhuskers to a 24-7 victory against Colorado.