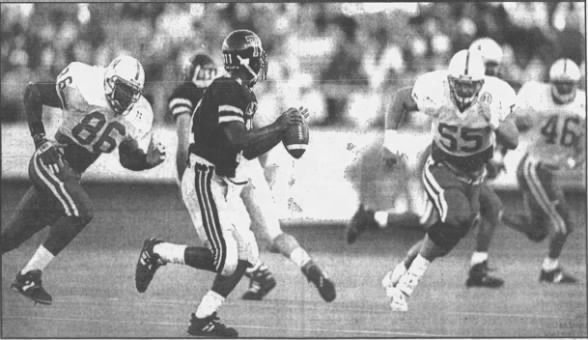 Five different Nebraska backs broke runs of at least 30 yards in a 524-yard rushing display that helped the Cornhuskers flatten the Red Raiders, 42-16.

“We’d be doing fine and then the dam would break and they’d hit us with something else. Finally, we ran out of fingers to stick in the dike,” said Texas Tech coach Spike Dykes.

“They just wore us down, especially that offensive line,” said Tech linebacker Zach Thomas. “I think they’ve got a great chance at the national championship.”

Nebraska built a 14-3 halftime lead on the strength of two long drives that ended with Tommie Frazier option runs of 58 and 3 yards. The Huskers missed chances to pad the advantage when Darin Erstad missed a pair of field-goal attempts and linebacker Thomas stuffed NU tailback Lawrence Phillips for no gain on a fourth-and-one from the Nebraska 46.

Tech made the score 14-9 after taking second-half kickoff and driving 80 yards in nine plays for a touchdown. The Jones Stadium crowd sensed an upset, but the No. 1-ranked Huskers went right to work, rolling 82 yards on each of two consecutive touchdown drives in taking a 28-16 lead.

Of the Huskers’ 524 rushing yards, 335 came after intermission.

Mike Minter had five tackles but suffered a season-ending knee injury in the third quarter.

Nebraska was supposed to win big Thursday night, with all of the nation watching. The Cornhuskers did, or they didn't, depending on the definition of big.

Nebraska may lose some votes for sloppiness, lack of a balanced attack (88 yards passing) and its inability to put the game on ice by the Halftime Blitz.

Those concerned with the Big 12 will have noted the attendance in Lubbock on Thursday, on a night that was brighter for Nebraska than it was for the new league's outlook.