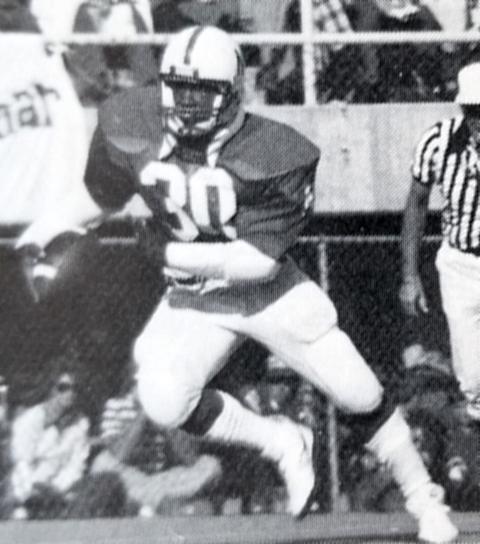 Mike Rozier picks up some of his 204 rushing yards. | Courtesy of Nebraska Athletics

Nebraska celebrated its return to Memorial Stadium after three weeks on the road by rolling up 496 yards of total offense in a 42-13 win over Kansas State.

All-America I-back Mike Rozier followed his 212-yard rushing performance against Colorado with a 204-yard, two-touchdown outing, and Turner Gill set a Big Eight completion percentage record by connecting on 11 of 12 passes (91.7 percent) for 101 yards and a TD.

Rozier joined I.M. Hipp as the only Nebraska backs to ever put together back-to-back 200-yard games, and his outing against the Wildcats included TD runs of 27 and 46 yards.

Gill’s passing performance bettered the old conference percentage record of 85.2 percent set by another Husker, David Humm, vs. Kansas in 1974 when he completed 23 of 27 passes.

“I’ve been up here many times with many ball clubs,” said K-State coach Jim Dickey. “I believe this is the best offensive team I’ve ever seen Nebraska have.”